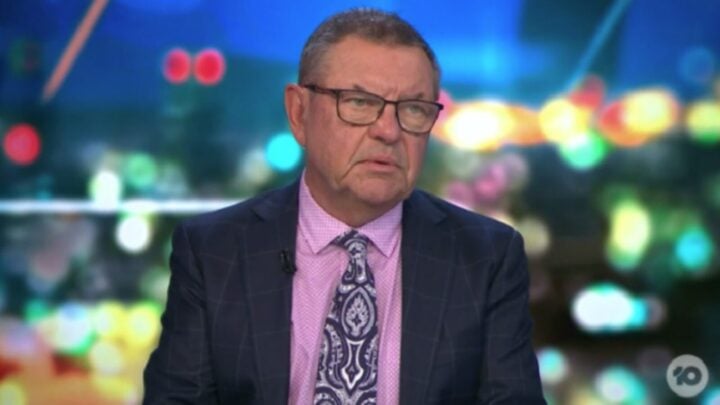 Steve Price has been separated from his elderly mother since February. Source: The Project.

The Project’s Steve Price has opened up on being separated from his mother, 87, who he has not seen since February due to coronavirus restriction. The 65-year-old broadcaster who lives in Melbourne made a heartbreaking confession on the Channel Ten program last night, as he admitted his elderly mother, who lives in South Australia, has “gone downhill” since news broke of a new coronavirus cluster.

“I’ve had to have a very difficult conversation again today,” he told his fellow panellists.

“Yesterday I gave my mother a date. I said, I will be there on the 10th of December in the car to pick you up after not seeing you since February. She’s 87, she can’t fly in a plane, she can’t drive herself. (And now) we may get shut out again,” he said making reference to South Australia’s growing Covid-19 cluster.

However, Steve’s co-star Carrie Bickmore encouraged him not to give up hope, saying: “You might be alright, Pricey.”

The broadcaster went on to say: “She said this morning, ‘OK, I’m just going to have Christmas Day on my own. I won’t make the Christmas cake ‘cos there’ll be no-one here to eat it’.

“I’m not being overdramatic — I really felt this morning that she’d gone downhill badly because of this news. And imagine how many other South Australians are in that boat tonight? It’s a b*****d of a thing, this Covid.”

Steve previously opened up on not being able to see his mother back in August during Victoria’s second lockdown, saying he felt “gutted” that he “might never physically see her again”.

“My mother’s in her late 80s,” he told fellow panellists at the time. “I’ve seen her once this year. She’s in the zone where anything could happen. I just feel gutted that I might never physically see her again. It’s awful. It’s awful.”

Steve’s co-stars, including Carrie and Waleed Aly, were quick to console him, with Bickmore telling him to look forward to seeing his mum again and “not to think like that”.

Aly, 41, said: “There’s every chance you’ll see your mum in the not-too-distant future.” To which Price replied: “‘I hope so, because it just breaks my heart.”

It comes as South Australia recorded one new coronavirus case overnight, bringing the total to 20. Of the cases, 17 are understood to be linked to one family. As a result, several states including the Northern Territory, Tasmania, Western Australia and Queensland closed their borders to South Australians.

Can you relate to how Steve feels? Are you worried about elderly relatives?