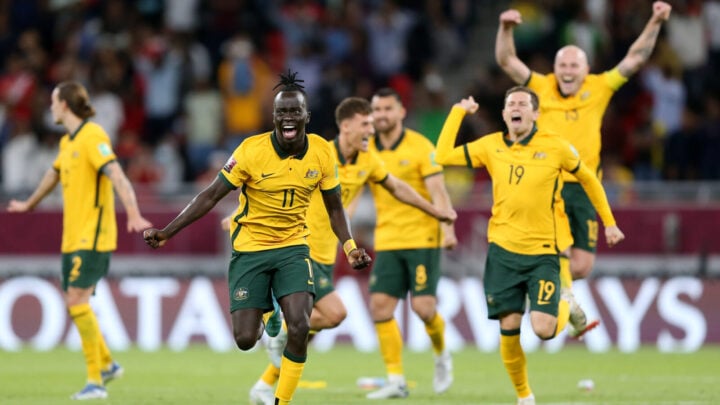 Socceroos win a spot in the World Cup. Source: Getty

The Socceroos have secured themselves a spot in the 2022 World Cup for the fifth time in a row, after winning a penalty shootout with Peru.

The match, ending in a devastating draw, saw both teams battle it out in an edge-of-your-seat penalty shootout leading to Australia’s 5-4 win.

Coach Graham Arnold took a winning punt, making the decision to play substitute goalkeeper Andrew Redmayne, who became the man of the hour with his triumphant save.

Arnold said he decided to play Redmayne in a bid to psych out Peru.

“And to try to get into the mind … to add that little bit of uncertainty in their brains. That’s the reason why.”

“A massive acknowledgement to Graham Arnold. What he has had to endure as a coach to get to this point over many years, what a crowning glory for him,” Harper said.

“People have got opinions on this and that on the other, but when you come to the end of a penalty shoot-out, if they didn’t win that they would be the other side of the coin, but the fact of the matter is the team under him prevailed, he guided the team to World Cup football, the biggest sporting event on the planet, and massive congratulations.”

In an interview with Network Ten on Twitter, the A-League goalie humbly rejected the label of the hero of the game, saying the win wasn’t possible without the team.

“I’m no hero. I just played my role like everyone else did tonight,” Redmayne said.

“Not even the 11 on the pitch, it was much more than that, it is a team effort.

“I can’t thank the team enough, the staff enough. You know, I’m not going to take credit. The boys ran out 120 minutes, and it not only takes 11 on the field but the boys on the bench, the boys in the stands.”

“I’m no hero, I just played my role – like everyone else did tonight”

BREAKING: @Socceroos are through to the World Cup ???????????????? @Tonaaayy_ was in the thick of it at Melbourne’s Fed Square when Australia defeated Peru in a penalty shoot-out!

Australia will go up against Denmark, France and Tunisia at the 2022 World Cup in November.