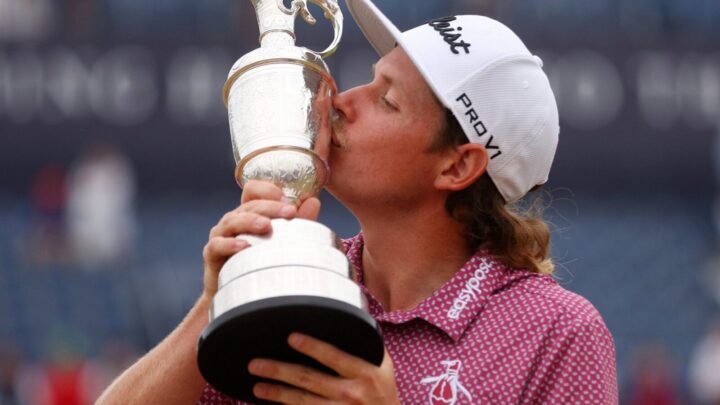 It was a miraculous scene of the green of the 150th British Open at St Andrew’s as Cameron Smith landed his name in Australian sporting folklore with an extraordinary comeback victory, becoming Australia’s newest major winner to win The Open Championship on Monday morning, July 18.

Having started the final round with four shots off, spectators were convinced the 2022 British Open was Rory McIlroy’s for the taking.

That was until the 28-year-old played one of the most significant final rounds in majors history, becoming the first Australian to claim the famous Claret Jug since Greg Norman at Royal St George’s in 1993.

“Ah, geez, what a week. I’m going to fall apart here, I know,” Smith said, choking back tears after being handed the coveted trophy.

“All the names on there, every player that’s been at the top of their game has won this championship.

“Yeah, it’s pretty cool to be on there. It really hasn’t sunk in yet. I don’t think it will for a few weeks. Yeah, it’s just unreal.”

As per Fox Sports, Smith “fired a bogey-free, eight-under, which included five-consecutive birdies at the turn, and another on 18” that ultimately sealed his historic win.

“McIlroy also went bogey-free, but his putter fizzled as only two birdie putts dropped in a final round that saw him finish third at 18-under,” Fox  Sports reports.

Monday’s results marked the end of McIlroy’s longtime attempt to win a fifth major, as he finished a further stroke back at 18 under following a final-round 70.

“But, look, I got beaten by a better player this week – 20 under par for four rounds of golf around here is really, really impressive playing, especially to go out and shoot 64 today to get it done.”

According to ESPN, Smith is the only player in the last 20 years to birdie the first five holes of the back nine in the final round of a major.

He joins not only golfing superstar Tiger Woods, but also legends Jack Nicklaus, Seve Ballesteros, and five-time Australian champion Peter Thomson, as winners of The Open at St Andrews.

Unbelievable performance from Cameron Smith. One of the greatest rounds in #TheOpen history. What a player. Congratulations.

This Cam Smith performance surely in the pantheon of great Aussie sporting victories. Went and won it. Extraordinary #theopen

After winning the unbelievable match, Smith dedicated his major triumph to the crowd of Australian fans who roared him to victory.

“I had a lot of support out there, especially the Aussie guys, you guys really kept me going out there,” Smith said.

“It seemed like there was a lot of you guys out there, you kept me plugging away so this one is for Aus!”

The Queenslander native even delivered an all-Aussie reaction to having the Claret Jug in his possession saying in a TV interview: “I’m definitely going to find out how many beers fit in this thing, that’s for sure.”

“I’m definitely going to find out how many beers fit in this thing” ????

Cameron Smith giving us an insight into how he’ll be celebrating his Open win! ???? pic.twitter.com/33PdC04eV0

Smith is the first Australian to win a men’s major since Jason Day in 2015 (PGA Championship), and just the third this century after Adam Scott (Masters, 2013) and Geoff Ogilvy (US Open), 2006.

Did you watch Cameron Smith's final round at The Open Championship?