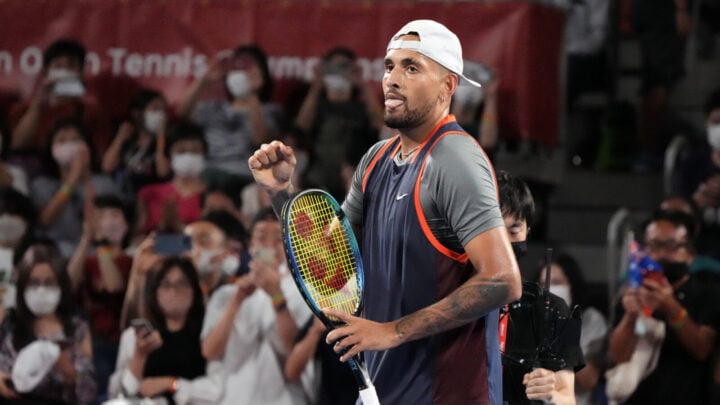 Tennis star Nick Kyrgios has overcome respiratory issues to absolutely smash his first game since his “heartbreaking” loss at the US Open.

Despite a shaky start, the sports diva delivered a crushing defeat to Taiwan’s Tseng Chun-hsin 6-3, 6-1 at the Japan Open, dropping only seven points during the match.

Kyrgios told reporters he had “played really solid” and his breathing issues were likely linked to the change in atmosphere in Tokyo.

“I came out a bit slow, but I don’t play many matches so it’s hard to just get straight back into that competitive flow,” the athlete said.

“But as soon as I held the first game I kind of found my form again and played really well.

“The court is obviously playing faster compared to normal hard court events. I’m not complaining about that — I think big servers and guys who like to take the ball early and have flat backhands, it suits our game style.

“It’s fun tennis to watch — people playing aggressive and coming to the net and serving big. I think that’s the type of tennis that fans like to see sometimes. The court’s probably faster than average, but I like it.”

Kyrgios, who is asthmatic, recently made the news when he had an on-court meltdown, spurred on by the smell of marijuana from the crowd, saying it made it hard for him to breathe.

“It was fucking marijuana,” he said.

“It was smoke. Obviously, I’m not going to complain about food. When athletes are running side to side and they have asthma, it’s probably not ideal.”

The 27-year-old went on to cause a ruckus, resulting in a hefty $7,500 fine for his behavior after he quickly lost his cool after losing a point to his US Open competitor, Frenchman Benjamin Bonzi.

Kyrgios spat at his own players’ box before hurling abuse at his team for his perceived lack of support.

“Go home if you’re not going to fucking support me bro,” he yelled across the court.

Despite this recent meltdown, Yahoo Sport reported that tennis great Rod Laver believed he had seen a clear change in Kyrgios, noting the controversial player’s ability to maintain his cool on-court is improving.

“Kyrgios has all the ability in the world, every shot that you could wish to make,” Laver said.

“He’s probably one of the biggest servers in the game. He’s accurate, he can play under pressure.

“But he knows that he can play and compete now. Don’t walk on the court thinking, ‘If I get three games, that’s enough.’