‘I hope he is here’: Nick Kyrgios calls for Djokovic’s Australian Open inclusion 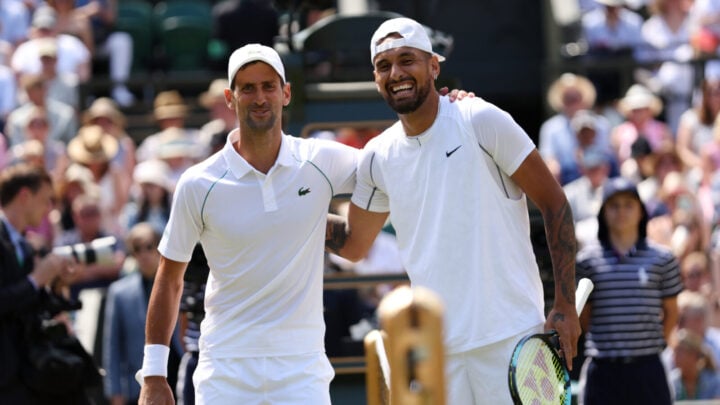 Kyrgios cited Djokovic as a major inspiration when it comes to competing and that he hopes he will see his former Wimbledon rival on the court. Source: Getty Images.

As tennis legend Novak Djokovic clings to hope that he will be permitted to compete in the 2023 Australian Open, he has received support from fellow tennis great Nick Kyrgios who called for Australia to welcome the World No. 7 “with open arms”.

Djokovic was due to play in the 2022 Australian Open, after being granted a medical exemption to compete despite being unvaccinated, however, his visa was cancelled after arriving at Melbourne’s Tullamarine Airpot on Wednesday, January 5.

Djokovic was told to leave the country on January 6. He left Australia after a last-ditch effort to have his visa cancellation overturned failed in Federal Court. Djokovic was seen at Melbourne’s Tullamarine airport Sunday, January 16, flanked by Australian Federal Police (AFP) officers as he boarded an Emirates flight to Dubai.

JUST IN | Novak Djokovic under AFP escort in the lounge at Melbourne Airport ahead of his flight back to Europe via Dubai next hour. #AusOpen pic.twitter.com/Mb47tW76VC

As a result of losing his appeal against his visa cancellation, Djokovic is barred from entering Australia for three years.

Despite Djokovic’s lengthy ban, Kyrgios has called for Kyrgios’ inclusion in the 2023 Australian Open.

“I hope he is here, for the sport,” Kyrgios told The Sydney Morning Herald.

“We just saw one of the legends leave the sport, Roger [Federer], and that’s going to be some shoes that no one is ever going to be able to fill.

“While Novak and Rafa [Rafael Nadal] are still around, we need these types of players. The people of Australia love the Australian Open, Ash Barty brought us crowds, me and Thanasi [Kokkinakis] won it.

“We want to see the best players in the world there. Me being a competitor, I want to see Novak there.”

Kyrgios cited Djokovic as a major inspiration when it comes to competing and that he hopes he will see his former Wimbledon rival on the court next year.

“He’s some of the reason why I play. As a kid, you want to play the best players in the world in the best stadiums. Hopefully, he is there,” he said.

“He’s had a rough run the last nine months and not being able to play here, hopefully, Australia welcomes him with open arms this time.”

Djokovic recently revealed that he remains optimistic that he may get the chance to enter the country and compete in the upcoming competition.

“When it comes to Australia, there are some positive signs, but unofficially,” Djokovic told Sportal.

“We are communicating through my lawyers in Australia. In fact, they are communicating with the authorities in charge of my case. I hope to have an answer in the next few weeks – whatever that answer might be, but of course I am hoping for a positive one – so that I have enough time to prepare for the start of the season, if that start is going to happen in Australia.”

The 35-year-old also reflected on his choice to remain unvaccinated despite the impact it has had on his sporting career.

“I have never offended anyone or ever tried to be disrespectful in any way. I always tried to show that it is important for everyone to have the right and freedom of choice,” he explained.

“For the choices I made, I knew there would be certain consequences like not going to America, and that is it.

“For Australia it was a different case, I had the exception, but in the end it did not work out. We know what happened, let’s not go back.

“This time I am waiting for the permission again. It is a good thing that they have now opened the borders for the unvaccinated foreigners traveling to Australia. I have that ban, I hope it will be lifted. As I said, it is not in my hands, I hope the people in the Australian Government will give a positive answer, that is all.”