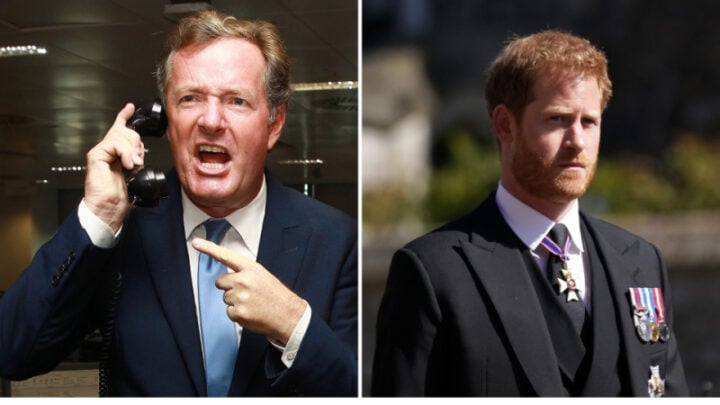 The outspoken Piers Morgan took Prince Harry to task over his refusal to attend the memorial service. Source: Getty Images.

British television personality Piers Morgan has taken to Twitter to accuse Prince Harry of being a “spoiled brat” after the royal’s notable absence from Prince Phillip’s memorial service on March 29.

The outspoken Morgan took Harry to task over his refusal to attend the service claiming he would rather “sulk” in his “Californian mansion” than pay tribute to his grandfather and offer support to his grandmother.

Imagine missing your mentor grandfather’s memorial service because you’re such a spoiled brat you’d rather sulk in your Californian mansion than be there to support your grandmother? Shameful.

The tweet was quickly met with a number of replies in strong agreement with Morgan.

“Totally agree @piersmorgan. This will only alienate them further from the royal household,” one Twitter user wrote.

“To see the great grandkids there and for her majesty not even to see Harry’s two on this day is such a mistake. Worrying abt security when it must’ve bn one of the most secure events he could’ve ever attended. He will now have to live with it.”

“Harry should have come to support his grandmother. How could anyone not?” another commented.

“It’s the end of Harry for me and I had lot of time for him. He’s perfectly safe coming here and so are his family. Very sad.”

The Queen joined members of the Royal family in the memorial service honouring her beloved husband Prince Phillip at Westminster Abbey on March 29.

As the service commenced, the Queen entered the church arm in arm with Prince Andrew before separating from him to take her seat alone. It also marked Andrew’s first public appearance since he settled his civil sexual assault case.

Also in attendance were Prince Philip’s two elder children, Prince Charles and Princess Anne. Prince William and his wife Catherine, along with their children Prince George and Princess Charlotte, sat in the row directly behind the Queen. Prince Andrew and Prince Edward sat across the aisle in the front row.

Prince Harry and Meghan Markle were absent from the service, with the couple claiming it is “unsafe” for them to return to British soil

Harry launched legal action against the UK government earlier this year after a High Court decision prevented him from paying UK police for personal protection.

Prince Harry has offered to personally pay for police protection after the Sussexes were stripped of their 24/7 protection when they stepped back from royal duties two years ago. The Duke of Sussex, who lives in the US with his wife Meghan Markle and their two children Archie and Lilibet, said he wants to visit his home country with his family, but needs to be able to “ensure” their safety.

At the time, a legal representative for Harry told The Sun, “Prince Harry inherited a security risk at birth, for life”.

“He remains sixth in line to the throne, served two tours of combat duty in Afghanistan, and in recent years his family has been subjected to well-documented neo-Nazi and extremist threats,” he said.

“While his role within the institution has changed, his profile as a member of the royal family has not. Nor has the threat to him and his family.

“The Duke and Duchess of Sussex personally fund a private security team for their family, yet that security cannot replicate the necessary police protection needed whilst in the UK. In the absence of such protection, Prince Harry and his family are unable to return to his home.”