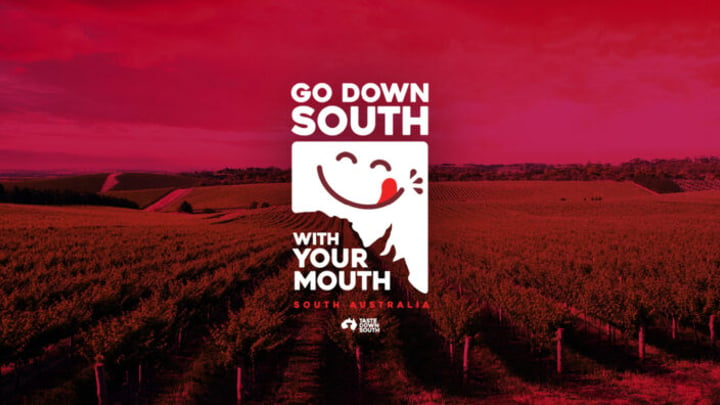 A new tourism video is linked to the controversial CU in the NT tourism campaign. Source: Supplied

South Australia’s racy new tourism campaign has set tongues wagging across the nation and left many wondering if it’s part of an elaborate April Fool’s prank.

The Taste Down South campaign invites Aussies to “go down south with your mouth” and “bask in Australian bush” while frolicking through vineyards and sipping cocktails.

The ad features footage of some of South Australia’s iconic wineries and eateries, and is narrated by a seductive female voice.

“Your tongue yearns for a certain sensation,” the narrator says. “Your heart and soul flower through flavour. Your taste buds take you to a fond place, familiar and warm.

“It’s time to go down south with your mouth.”

Social media users have taken to Twitter and Instagram to share the campaign and their disbelief, while local tourism authorities say they have nothing to do with it.

One social media user wrote: “Apparently, the new #tourism campaign for #SouthAustralia is called #GoDownSouthWithYourMouth. Sounds more like a tagline for #LoveIsland if you ask me.”

While others were calling Australia’s sense of humour the “greatest in the world”.

The ABC has reported the campaign is linked to the same two entrepreneurs that created the controversial ‘CU in the NT’ tourism campaign, which launched in November 2016. According to the media outlet, the Taste Down South website domain information shows it is registered to ICBM Pty Ltd, which is owned by none other than Adam Blackburn and Blaze Tripp – the cheeky faces behind the Northern Territory tourism advert.

The SA campaign is said to be rolling out over six months, with the press release stating the aim of the campaign was to highlight the region’s “mesh of exciting, multicultural cuisine”.

“Our diverse pocket of Australia is home to world-class chefs, industry-leading winemakers, and producers of the most sought after organic delights,” it said.

In the press release, Clarke Reid, who claims to be a Taste Down South representative despite there being no evidence they exist, said “down south” was “an unexplored goldmine of tastes and delights”.

“It mightn’t have the glitz and glamour of some east-coast states, but there’s a lot buzzing under the hood down here,” he said.

What do you think of the campaign? Is it too much, or just a good bit of fun?