You had one job! IKEA fridge slated in Shonky awards as ‘worst ever tested’ 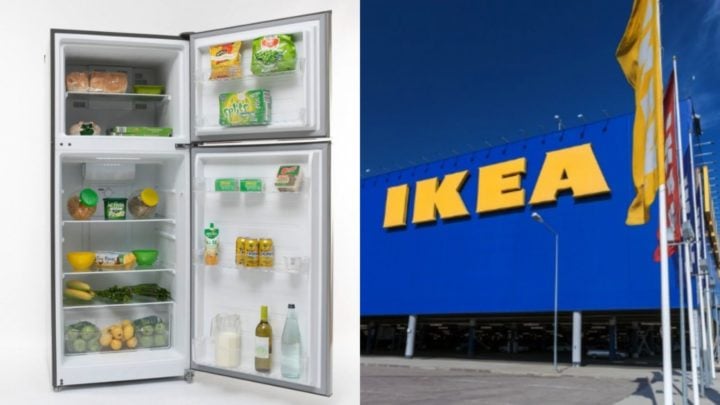 The Shonkys has named and shamed the IKEA NEDKYLD fridge for failing at its on job. Source: Supplied (left).

Fridges come equipped with all the mod cons these days, with everything from ice makers through to chilled water dispensers. But it’s fair to say when you’re looking for a new cooler for your kitchen, you’d expect it to meet the basic requirement of keeping your food chilled at an adequate temperature.

However, IKEA’s popular NEDKYLD fridge has been slated for failing at just that, with this year’s Shonky Awards claiming it’s one of the worst ever tested. In fact, the brutal review went on to slam the appliance for “spoiling your food, expensively” by failing at its one job.

The awards, run by consumer advocacy group Choice, “stand up against companies doing the wrong thing” and call out businesses for rorting customers out of their hard-earned money. However, the review of the popular fridge may be one of the harshest yet.

“The IKEA Nedkyld is one of the worst fridges we’ve ever tested,” Choice said in its review. “Not only is it terrible at keeping your food cold, when CHOICE tested the Nedkyld’s energy use against its star rating, it failed the test. It’s hard to understand how this fridge is still on sale in Ikea stores, especially with a misleading energy label.”

In a statement online, Choice questioned why the Swedish furniture giant would attempt to sell fridges in the first place, “especially when you’re no good at building them – or rather, getting them built”. While it said it would excuse the NEDKYLD for missing some of the more modern extras, it insisted this didn’t excuse it for using “a lot more electricity than it claims on its energy star rating label”.

“Temperatures inside the freezer change by 10°C, depending on the outside temperature. Which means the Nedkyld isn’t safe for long-term freezing,” the statement went on. “In the ‘good points’ section of our review we summed it up succinctly: ‘none to mention’. You’d almost think this fridge was meant to be a piece of decorative furniture, if it weren’t for the drain on your energy and food budget.

“The rough translation of the Swedish word Nedkyld to English is ‘super cool and unemotional’. We’re trying to keep our emotions in check on this one, so we’ll just say this is one shonky whitegood.”

Ikea has since responded to the review in a statement to Starts at 60, insisting its products “undergo continual testing and improvements”. It stated the energy rating was awarded by an independent and accredited test lab, in line with Australian regulations.

“It’s disappointing that the NEDKLYD fridge has been included in the recent Choice report. The NEDKLYD fridge is a popular model and has received positive feedback from our customers,” the company added.

And it wasn’t the only product named and shamed in the awards, with insurance company Kogan making the list too thanks to 300 complaints to NSW Fair Trading between January and July this year. Choice claimed: “Kogan needs to improve its customer service and stop beating around the bush when its products are defective. Kogan must simplify the process for refunds, repairs and replacements to meet community expectations and the law.”

The worst of the worst for breakfast cereal turned out to be Freedom Foods’ XO Crunch, “for telling us a bag of sugar is healthy”. Choice branded it a “disgrace” and added that it had made a complaint to the ACCC “regarding misleading advertising of this and other products with similar health claims”.

Elsewhere, Medibank’s basic cover health insurance was slammed for being “more expensive than [the] cheapest ‘Bronze’ options in several states”, and AMP superannuation also made the list for “ruining retirements” through “over 1 million zombie super accounts” which it claims “sit there being wasted away by fees and insurance”.

“This year CHOICE found this industry so bad we refused to recommend any policy. There was not a single policy that we could in good conscience suggest that pet owners consider buying. This also highlights why insurance companies shouldn’t be exempt from laws against unfair contract terms – it’s vital this special loophole for insurers is closed.”

Do you have this fridge? Do you use any of the brands that have been named and shamed?