‘She leaves or I do’: Mother-in-law crashes family holiday without asking 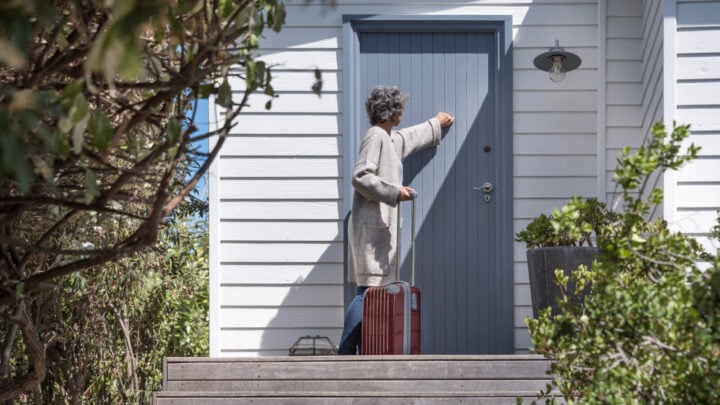 A mother has crashed her son's holiday lan and her wife is far from impressed. Source: Getty

For most of us, the last thing we want is our in-laws ‘dropping in’ let alone shamelessly crashing a family holiday. For one woman in the UK that’s exactly what happened, yet she’s torn as to who is in the wrong, revealing that while the mother-in-law did own the holiday home they were staying in, she hadn’t asked to visit.

The woman took to the online Mumsnet forum to say she is second guessing who is in the right, explaining that she and her husband and their two teenage children stay at her mother-in-law’s holiday home one week every year. She explained because of Covid-19, her mother-in-law had offered for them to stay an extra week

“MIL (mother-in-law) has a holiday home in a nice part of the UK. We usually stay there with her for one week a year and DH’s (darling husband’s) siblings and their families do likewise. She rents it the rest of the time,” the women wrote on the forum.

The woman continued to say that she did have reservations about the offer, explaining that while her mother-in-law was well-meaning, they live only ten minutes apart and see each other quite “a lot”.

“She’s a well-meaning woman but we’re very different. We also live 10 mins from her so see her at least once a week for dinner or Sunday lunch,” she said. “She also pops round a lot which is wearing when I work from home. Weirdly she ‘doesn’t want to disturb DH’ but is fine sitting at the kitchen table waiting for me to make her a cuppa.”

Due to her reservations about the offer, the woman says she asked her husband to subtly find out whether she had intentions of joining them, but the offer seemed entirely string free.

“So I asked DH to tactfully find out if she expected to come as well and if she did then to make an excuse because I can’t face a whole week with her in summer on top of the week we will be having with her next half term,” she said. “He chatted with her, mentioned that we really needed some family time to do water sports (which she hates) and surprisingly she told us to go ahead without her.”

The holiday plans continued full steam ahead, and knowing the family would have the house to themselves, the woman says they decided to let their two teenagers bring a friend each, but of course, received the mother-in-law’s permission first.

“So. We got here Saturday. It’s very nice. I’m thinking happy thoughts about how generous this is of her. We came back from the beach three hours ago and SHE’S HERE,” the woman wrote. “Apparently she had a boring, lonely weekend, felt sad so decided to surprise us.

“[The] thing is there’s no room. It’s a three-bed place. DD (Darling Daughter) and friend, DS (Darling Son) and friend and DH and I. She [is] really put out by this despite us asking about the friends and despite her not telling us she was coming.

“DH found her getting DS and his friend to move their things into the living room to sleep on the sofas and he got really cross with her.”

The woman said things only got worse from there, with her husband confronting his mother about turning up only to have her storm in and announce “she was leaving as she hadn’t realised she’d be so unwanted”.

“We let her go,” she wrote. “She came back 20 mins later saying she was too upset to do the drive and is now sitting sniffling in the lounge.

“The thing is I’m just so unreasonably mad with her. I’ve seen her at least three times a week for the past 18 months and I’m done. I’m about to tell DH that she leaves or I do which will put him in an awful position. Do I have the right to be this cross?”

The responses on the post were incredibly mixed, with most saying the woman had the right to be annoyed.

“I would be absolutely livid. Of course, it’s her house but she is needling in deliberately, she knew full well the arrangements, she’s just being f***ing horrible and selfish,” one said. “If I were you, I would say she is welcome to stay, and I am welcome to LEAVE.”

Others said the woman was being a little unreasonable and said her mother-in-law was lonely and only wanted time with her family.

“She sounds lonely though, maybe you need to start holidaying elsewhere to avoid these blurred boundaries,” one said.

“I can see why you’re annoyed, but it’s her holiday home and I think after this, you won’t be allowed to use it again if you don’t calm down,” another said.

Who do you think pushed the boundaries here?