‘Rest in power’: Tributes pour in as the world bids farewell to Brazilian soccer icon Pelé 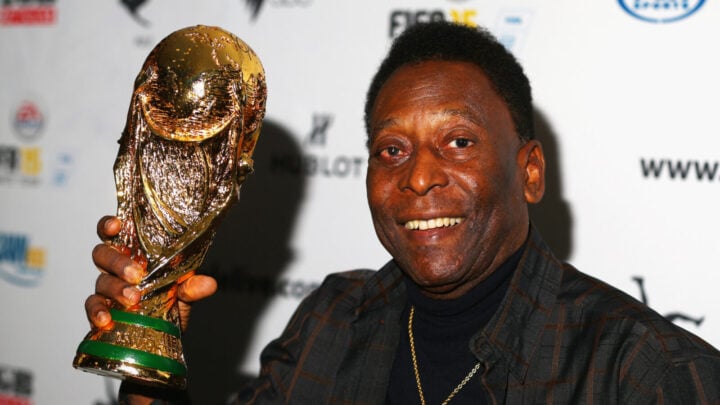 Following the news of Pelé's passing, tributes from across the globe began to pour in from fans, high profile identities and fellow sporting figures alike. Source: Getty Images.

One of the greatest soccer players of all time, Pelé, has sadly passed away at the age of 82 following a long battle with colon cancer.

The sporting legend’s death was confirmed in a statement on his official Instagram page, claiming “King Pele” had “peacefully passed away” on Friday, December 30.

“Inspiration and love marked the journey of King Pele, who peacefully passed away today,” the statement read.

“On his journey, Edson enchanted the world with his genius in sport, stopped a war, carried out social works all over the world and spread what he most believed to be the cure for all our problems: love.

Pelé’s daughter, Kely Nascimento, also took to social media to deliver a moving tribute to her late father alongside a poignant image of family members placing their hands on the soccer legend as they bid their final farewells.

“Everything we are is because of you. We love you infinitely. Rest in peace,” Nascimento captioned the photo.

Born Edson Arantes do Nascimento in 1940, Pelé took an interest in soccer early after kicking around a sock stuffed with newspaper and tied with string as his family could not afford a proper soccer ball.

He competed with several amateur soccer teams in his younger years, his talent for the game shone through early when he led Bauru Athletic Club juniors to two São Paulo state youth championships.

As he entered his mid-teens, Pelé played for an indoor soccer team called Radium and was part of the first indoor football competition in the area. Alongside his team, Pelé secured several championships.

Pelé began playing for Santos at age 15 before playing for the Brazil national team at the age of 16.

During his impressive international career, Pelé won three FIFA World Cups in 1958, 1962 and 1970, and is the only player to do so.

He received the monicker of ‘O Rei'(The King) following his performance in the 1958 tournament.

Pelé is the joint-top goalscorer for Brazil with 77 goals in 92 games at club level and holds the title of Santos’ all-time top goalscorer with 643 goals in 659 games.

Pelé has not only been credited with linking the phrase “The Beautiful Game” with soccer, but his scene stealings goals have made him a global star and national hero in Brazil.

Following his retirement in 1977, Pelé became a worldwide ambassador for soccer and in 1999, he was named Athlete of the Century by the International Olympic Committee and was also included in the Time list of the 100 most important people of the 20th century.

His impressive 1,279 goals from 1,363 games is recognised as a Guinness World Record.

Following the news of his passing, tributes from across the globe began to pour in from fans, high profile identities and fellow sporting figures alike.

Farewell to a legend, an icon, three-times FIFA World Cup winner, one of the greatest to ever grace a football pitch and congratulated for his work off it.

Rest in peace, dear Pelé. Thank you for everything! pic.twitter.com/jNkofi6t88

FIFA and all of the football world is mourning the death of O Eterno Rei – the eternal king.

Rest in peace, Pelé. Our thoughts and sympathies are with your family, friends and all who had the joy of watching you play.

Tonight we light the arch in the honour of Pelé.

His unique talent lit up the game of football, and inspired the world. pic.twitter.com/6Ho2Fqz37A

Pelé was one of the greatest to ever play the beautiful game. And as one of the most recognizable athletes in the world, he understood the power of sports to bring people together. Our thoughts are with his family and everyone who loved and admired him. pic.twitter.com/urGRDePaPv

It’s sad to hear that Pele has passed away. He was a lovely man and a fantastic footballer. I was very lucky to meet him at Highbury in 1981 and I’ll never forget it. pic.twitter.com/uO11esWQWJ

Pelé is survived by wife Marcia Aoki, as well as six known children.