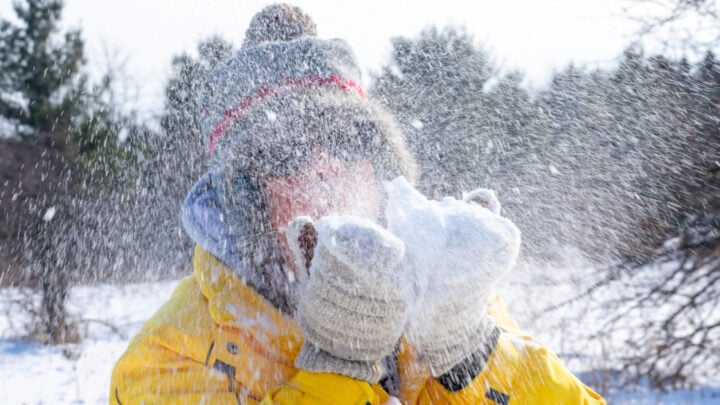 Snow, rain and thunderstorms - we're in for a wild few days. Source: Getty

If you haven’t already dusted off your Ugg boots and pulled out the winter woollies, now’s the time, as we’re in for a cold blast from the Antarctic later this week! Experts are even predicting snow and risky conditions for parts of Australia’s east coast.

The Bureau of Meteorology has warned of dangerous weather, as freezing temperatures are set to hit regional areas of Australia’s eastern states, and forecasters are now saying it could be a lot worse than first predicted.

According to Sky News meteorologist Rob Sharpe, there are now concerns the system could develop into an east coast low by mid-week. “East coast lows are one of the most dangerous types of weather events in Australia, and bring the threat of flooding rain, damaging winds and dangerous surf,” he said.

The extreme weather event is being heralded as the first big cold snap of winter, with snowfall forecast as far north as Queensland.

New South Wales residents should expect an icy front on Wednesday and Thursday, which could bring snow to the central and northern tablelands.

BoM meteorologist Melody Sturm said, from Tuesday onwards, a cold front crossing through much of NSW would bring rainfall, winds and the chance of snow. “It’s going to be mostly Wednesday and Thursday, the temperature will be low enough for rain to turn into snow above the 900m mark,” she said. Areas lower than 800 metres could expect a combination of rain and snow, she added, while under 500 metres should expect heavy rainfall.

BoM has also warned of the risk of livestock deaths across much of NSW, stretching from the north coast and northern tablelands, to the south coast and western regions.

Sturm said Wednesday and Thursday would see the coldest temperatures of the week for most of NSW, with minimums set to reach between 4 and 7 degrees cooler than average for this time of year. Strum also warned of damaging winds across the state, particularly in the alps and higher altitude areas of the tablelands.

The New England area is also in store for a chilly few days and the “heaviest snow in years”. Guyra is forecast to hit just 3 degrees on Thursday, while Walcha will reach 4.3 degrees, Armidale 5.7 degrees and Tenterfield 7.6 degrees. Experts predict up to 20cm of snow could fall on Armidale and Glenn Innes.

Unassuming Queensland residents aren’t in the clear, with Thursday set to be the state’s coldest day of the year. Major Queensland metropolitan areas, including Brisbane, the Sunshine Coast, Gold Coast, Ipswich, Toowoomba, will endure single-digit temperatures this week. Regional areas will hit minus figures, with Stanthorpe expected to reach just 8 degrees, with a low of -2 degrees.

Queensland BoM forecaster Matt Marshall told 7NEWS that the state’s north will also be impacted by the cold system, with negative temperatures being felt “north of Roma, into the centre of the state”.

“As we go into tomorrow, as the front moves into south-east Queensland, we’re going to see rainfall extend to those areas,” he said. “We could see some snow around the Granite Belt — Stanthorpe and surrounding areas. Probably the most likely time, if we do get some — and it’s not a guarantee we will get snow — is late Wednesday evening and during the day on Thursday. I think waking up on the Thursday morning will be when people first notice the cold.”

Central Victoria is expected to be fairly chilly, with Ballarat reaching just 9 degrees on Wednesday. For areas above 1,000 metres, snow is likely on Tuesday and Wednesday. The state should also expect thunderstorms and heavy rain following the cold front on Wednesday and Thursday.

Have you experienced the freezing temperatures already?