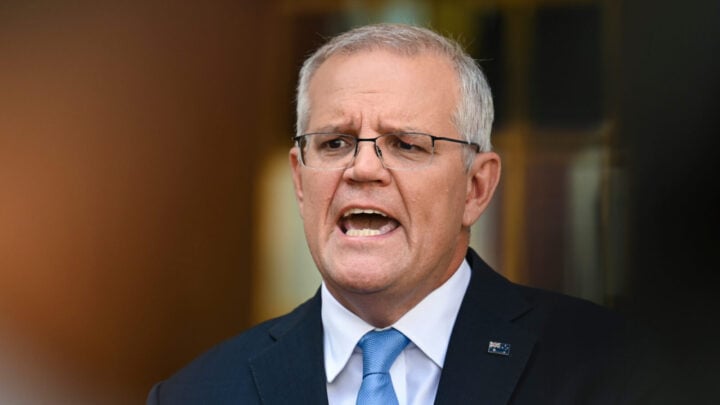 Prime Minister Scott Morrison has taken a very public swipe at cancel culture, claiming Australians “are getting pretty fed-up with having to walk on egg shells”.

Morrison made the comments on Wednesday, April 20 while defending Liberal candidate for Warringah, Katherine Deves regarding comments she made about trans women competing in sport.

“The remarks that Katherine has made in the past that have been insensitive, she’s withdrawn those remarks and I think she has learned that in taking forward the primary issue that she is seeking to raise, as a woman raising three daughters of her own, is about women and girls in sport,” he said.

“That’s what she’s seeking to bring attention to.

“But what I won’t allow is for those who are seeking to cancel Katherine simply because she has a different view to them on the issue of women and girls in sport.

“I think Australians are getting pretty fed-up with having to walk on eggshells everyday because they may or may not say something one day that’s going to upset someone.

“Australian’s are fed up with walking on egg shells”.@ScottMorrisonMP says he won’t let people cancel Katherine Deves in response to a question about the mental health of young ppl, but steps around q about the candidate for Cooper, Jadon Atkinson #ausvotes #auspol @SBSNews pic.twitter.com/OPppJGhXzG

“And I have a very strong view that people should have rights to raise issues and have public debate without being cancelled. And I agree with what the Prime Minister said yesterday. I think Australians are sick of treading on eggshells,” he said.

However, Morrison’s continued defence of Deves may put him at risk of losing two NSW seats in the upcoming election.

Two recent polls conducted in Parramatta and Wentworth by Redbridge Group, for Equality Australia, found that discussion that is critical of the LGBTIQ+ community costs at least twice as many votes as it gains.

The research also revealed that, of those surveyed, approximately three in four people agree that trans and gender diverse people are entitled to the same rights and protections as other Australians.

Trans Equality Advocate at Equality Australia Jackie Turner said “the kind of misinformation and abuse that has been directed at trans women in particular during this campaign contributes to the extreme levels of marginalisation that trans people experience, and results in some of the worst mental health outcomes in the Australian community”.

“The people of Wentworth and Parramatta agree with what we know the overwhelming majority of the community believe – people should be treated with dignity and respect, and be free to live their lives free from discrimination, no matter who we are, who we love, or whether we are trans or not,” Turner said.

“After weeks of coverage of the cruel, dehumanising misinformation used by some to divide the community and attack trans and gender diverse people, particularly trans women, this research demonstrates that the vast majority of Australians stand in support of LGBTIQ+ people, and against discrimination.”