Morrison to ditch $8B taxpayer levy for National Disability scheme 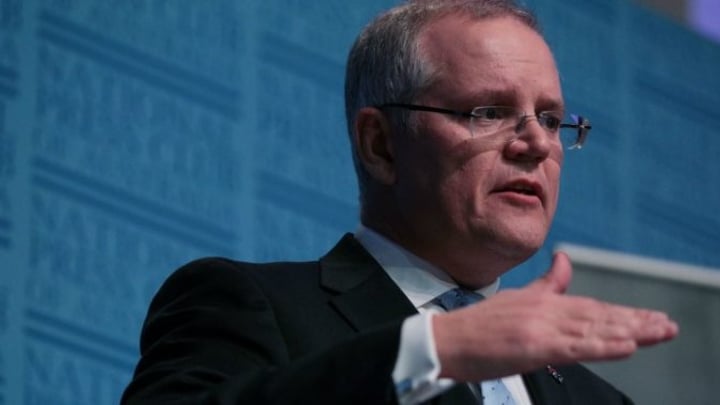 Treasurer Scott Morrison delivers his post-budget address at the National Press Club in Canberra in May 2017. Source: Getty

The government will announce it has ditched an $8 billion Medicare levy increase that was designed to fund the National Disability Insurance Scheme.

According to reports from the ABC, The Australian and others, Treasurer Scott Morrison will instead say that an unexpected budget windfall from the strong Aussie economy would fully cover the shortfall in funding for the Labor-conceived scheme designed to support people with disabilities and their families and carers. The scheme was left with a lack of long-term funding to the tune of about $8 billion when Labor lost government in 2013.

Morrison is expected to make his announcement on Thursday morning in a speech in Sydney, The Australian reported.

At the budget in May 2017, the treasurer had announced an additional levy, on top of the Medicare levy paid by higher-income earners, taking the total levy up to 2.5 per cent in order to cover the lack of NDIS funding. That would had socked people on incomes as low as $25,000 for $125 a year, while those on incomes of $175,000 would have paid an additional $875 in tax, and the ABC reports that the average wage earner would’ve received a bill for $375.

The ABC reported on Wednesday night in what it said was exclusive news, however, that the treasurer will say that tax receipts were coming in higher than expected by December, including an additional $3 billion in company tax receipts. That means the government will be able to find the money to plug the $8 billion gap without resorting to taxpayers.

The Australian reckoned the surprise move put Labor in a tricky position, given that leader Bill Shorten had himself planned the same levy increase to 2.5 per cent, but only for workers earning above $87,000 a year.  The budget is just 12 days away, leaving him little time to tweak his plans.

“With the Opposition’s plans to not only retain the increased levy but reinstate a two per cent debt and deficit levy on higher income earners, Labor will go to an election with an effective top marginal tax rate of 49.5 per cent,” the newspaper’s national political editor Simon Benson wrote in a story on Wednesday evening.

But the ABC said that the government itself would’ve faced difficulty in forcing the increased levy through parliament, given that Shorten had only agreed Labor’s support for the increase for the higher tax brackets i.e. those earning more than $87,000.

“It was not clear whether the Government could get enough support in the Senate to increase the levy,” the ABC’s political editor Andrew Probyn wrote on Wednesday night.

Do you think this is the right move by the government? Do you believe the NDIS is a valuable investment for the nation?