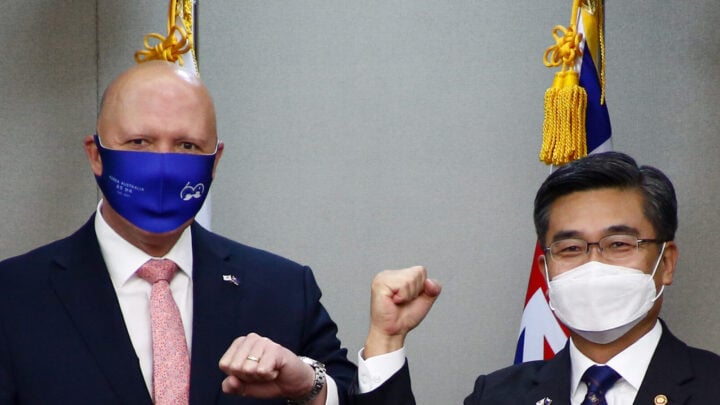 A video showing Minister for Defence Peter Dutton making an embarrassing blunder in a meeting with South Korean officials has gone viral Thursday morning for all the wrong reasons.

In commemorating agreements between Australia and the Republic of Korea, Dutton and his South Korean counterpart, Suh Wook, attempted to elbow bump for photographers. What followed was a catastrophic eight seconds of awkward learning for Dutton.

As they entered the room, Suh raised his arm, expecting Dutton to raise his aligning elbow for an elbow bump, as has become convention globally since the pandemic has begun. However, Dutton instead raised the same arm as Suh, presenting what was described by one Twitter user as a “clenched fist of domination”.

Understandably confused by Dutton’s posture, Suh attempted to clarify by pumping his fist slightly, to explain the situation to Dutton. Dutton, misunderstanding again, turned his body to use the already raised arm, then lifts the other – clearly baffled by this action Suh is proposing – before settling on the original arm to try and elbow bump.

Suh, realising Dutton does not understand the situation, grasps Dutton’s closest arm and lifts it up, quickly pressing his arm against Dutton’s for the photo.

Dutton is currently on a tour of India, Indonesia, the United States of America and South Korea with fellow cabinet member and Minister for Foreign Affairs, Marise Payne.

The awkward eight seconds occurred on Monday, after the ROK-Australia Foreign and Defence Ministers’ Meeting in Seoul, where the Australian cabinet members met with their ROK equivalents and discussed increasing joint training and military exercises, as well as defence industry, science and technology collaborations.

The clip is going viral right now, thanks to a tweet published by News Fighters Podcast.

BREAKING: Peter Dutton doesn’t know how to do an elbow bump #auspol pic.twitter.com/xwVL7roPpu

There have been many funny responses to the silly blunder. Twitter user @cruxzin said “That’s what happens when you put My Potato Heads arms on backwards…”

Another user, @mfunnell3″To think Australia once had a reputation of fighting men agile & quick to think on their feet…”

Last week, Dutton and Payne commemorated the 20th anniversary of the 9/11 attacks whilst in New Dehli. Both Dutton and Payne placed wreaths at the US Embassy, paying their respects to lives lost in the tragic terror event.

Today, the ministers are in Washington DC, attending the Australia-United States Ministerial Consultations, hoping to secure a deal with America that would see more practical support from America in regard to the ongoing trade disputes between Australia and China. The US has proven morally supportive of Australia regarding these strikes, however, this has not amounted to any material support as yet.

Have you ever made a silly mistake like this?