Joe Biden sworn in as 46th US president 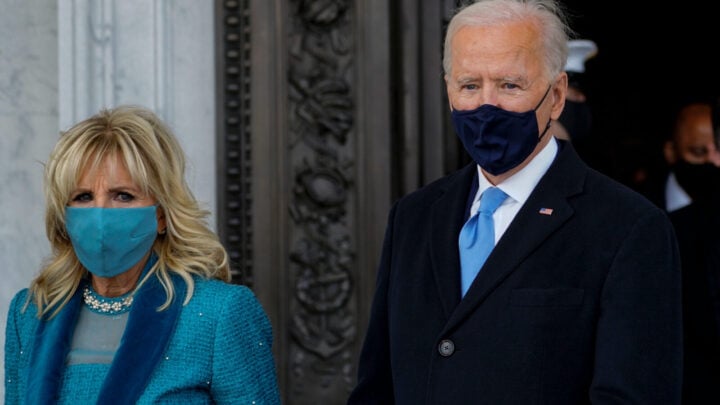 Joe Biden pictured alongside his wife Jill at his inauguration ceremony. Source: Getty.

Joe Biden was sworn in as the 46th president of the United States on Wednesday at noon (EST) in an inauguration ceremony watched by millions across the globe. Biden’s running mate Kamala Harris was also sworn in as the nation’s first female vice president – and the first black woman and person of South Asian descent to hold that role.

“Through a crucible for the ages, America has been tested anew, and America has risen to the challenge,” Biden said in his inaugural address, Reuters reports.

“Today we celebrate the triumph not of a candidate but of a cause: the cause of democracy… At this hour, my friends, democracy has prevailed. To overcome these challenges to restore the soul and secure the future of America requires so much more than words. It requires the most elusive of all things in a democracy: unity.”

Former president Donald Trump and his family were not in attendance, however according to reports, Trump left behind a “very generous” letter to his successor before leaving the White House. Instead the 74-year-old flew to Florida before Biden was sworn into office. Before his departure, the outgoing president held a farewell event at Joint Base Andrews, an air base in Maryland, where he spoke to a crowd of family, staff and supporters.

“What we’ve done has been amazing, by any standard,” Trump said, Sky News Australia reports. “I will always fight for you. I will be watching. I will be listening. And I will tell you that the future of this country has never been better. So just a goodbye. We love you. We will be back in some form.”

The inauguration ceremony was much smaller than in previous years due to Covid-19 restrictions. However, a line up of star-studded celebrities were in attendance, such as American singers Lady Gaga and Jennifer Lopez and country music legend Garth Brooks, who all performed. Meanwhile, actor Tom Hanks hosted a prime-time TV special celebrating the inauguration, with performances from Demi Lovato, Justin Timberlake and Jon Bon Jovi.

Did you watch the ceremony?