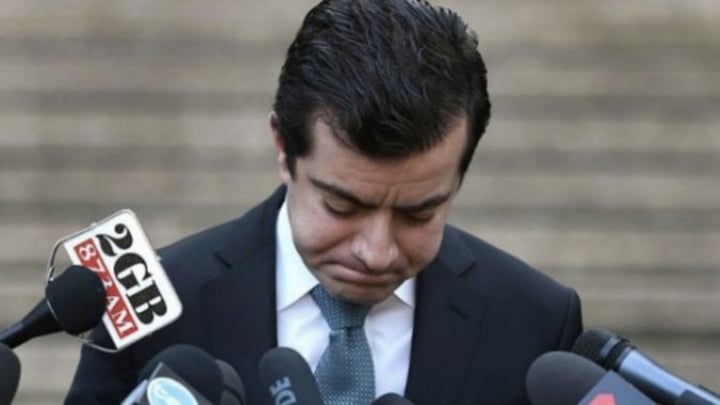 He was fired as deputy Senate whip and Senate committee chair in November. Source: Getty.

He is no stranger to controversy, but Sam Dastyari’s latest confessions are guaranteed to shock even his biggest haters as the former Labor pollie opens up about what life has been like since his scandalous resignation from the Senate.

Dastyari sat down with Joe Hildebrand for Stellar magazine and opened up about the immense relief he felt when he resigned from parliament at the end of last year, over his links to China.

“The moment I resigned from Parliament was probably the best I’ve ever felt in my life,” he said. “Just the euphoria of relief. I’ve done every drug under the sun, and they were all beaten by the euphoria you get from that relief.”

The 35-year-old, who served in the Senate between 2013 and 2018, was sacked as deputy Senate whip by Labor leader Bill Shorten in November after the ABC released audio of Dastyari backing Beijing’s South China Sea policy, in opposition to Labor’s stance on the issue.

Following his fall from grace, Dastyari revealed he battled depression and confessed to spending six days without even stepping foot outside of his bedroom.

“There were certainly nights where your logic goes so out the door, that you suddenly start thinking things like: ‘Well, the people who love me would be better off if I wasn’t here anymore…’” he said.

Eventually he went to see a doctor and was prescribed anti-depressants however he began drinking heavily, revealing he would sometimes knock back as much as three bottles of wine, plus beer and shots, in one night.

He added: “The breaking point for me was it was 3am, I’m at the casino — because it’s Sydney and everything else is closed — and I’m drinking heavily for like the third or fourth night in a row and I go: ‘Something’s gotta change.’”

He gave up the prescription drugs and booze immediately after that and for 15 days survived on nothing but water in a bid to make a clean break, describing the first 72 hours of withdrawal as the worst he has ever felt.

Despite now preparing to launch his own TV show called Disgrace!, Dastyari said he still hasn’t been able to forgive himself for his actions. “I’m not there,” he said, “I don’t want pity, I don’t want forgiveness, I don’t want acceptance. But I would love to stop hating myself.”

“Going through that horrible period definitely changes you,” Dastyari added. “It makes you aware of pain.”

What do you think? Was Dastyari right to resign from politics?