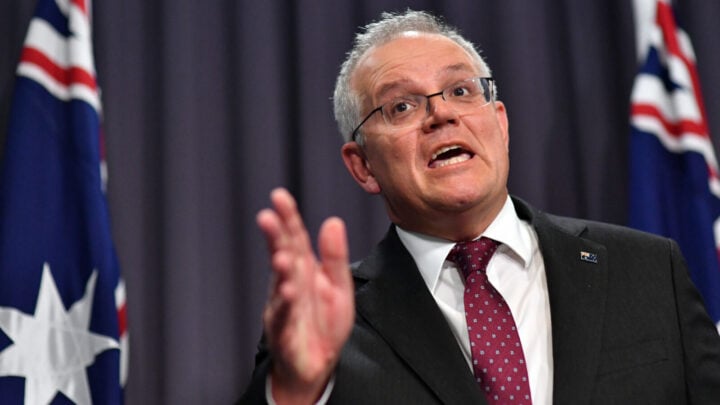 Prime Minister Scott Morrison’s approval rating has dropped eight points in a month because of his handling of the pandemic — with more than half of respondents saying it’s time for the coalition to step in.

The Guardian Australia surveyed 1,368, with results showing the Prime Ministers approval rating has fallen to its lowest level in a year dropping to 54 per cent from 65 per cent in February. In March, his popularity took a dive amid parliamentary sex scandals, and the latest dip comes as the government scrambles to recalibrate the vaccination program.

According to the survey, just over half of respondents believe they are being vaccinated more slowly than they would like, and 27 per cent felt the vaccinations were progressing a lot more slowly than they would like. The survey also found that more than half think the coalition needs to step in to ensure Australians are vaccinated as quickly as possible.

Interestingly, people aged over 55 were more likely (73 per cent) than younger voters aged 18-54 (around 40 per cent) to think the vaccine rollout is progressing too slowly, poll results also showed.

On Sunday night, Morrison admitted via a statement on his Facebook page that the government had abandoned plans to set any sort of vaccination targets. Announcing that the initial target of October had proven unachievable due to dosage import delays and health concerns, he confirmed that the end-of-year timeframe was off the table.

“The government has also not set — nor has any plans to set — any new targets for completing first doses,” he said. “While we would like to see these doses completed before the end of the year, it is not possible to set such targets given the many uncertainties involved.”

The announcement was the second time in two days the PM had taken to Facebook (where he has about 626,000 followers) to announce vital updates to the Covid vaccination program. “One of the things about Covid is, it writes its own rules,” he said in a video on Facebook on Monday. “So, rather than set targets that can get knocked about by every to and fro of international supply chains and other disruptions that can occur, we’re just getting on with it.”

In the video, the PM said the government was making “steady progress” to ensure Australia’s most vulnerable people, and frontline workers in the health and quarantine system would be vaccinated by the end of the year.

Morrison highlighted the lack of any community transmission and the normality of life around the country, while reminding Australians that this “was not the case in much of the world”.

It comes just days after the European Union found a link between the AstraZeneca vaccine and blood clots, with the Australian government advising those under the age of 50 not to get the jab. Following the advice, the government will now be forced to rely on the Pfizer vaccine, which is imported from overseas, and the yet-to-be-approved Novavax vaccine, to complete the roll out — adding additional supply pressures in an already tight international market.

On Tuesday, just days after the announcement, a Western Australian woman in her 40s suffered blood clotting after receiving the AstraZeneca vaccine. The Therapeutic Goods Administration (TGA) said an investigation was under way, but confirmed the case was likely linked to the vaccination.

How do you think the PM has handled the pandemic and vaccination program generally so far?