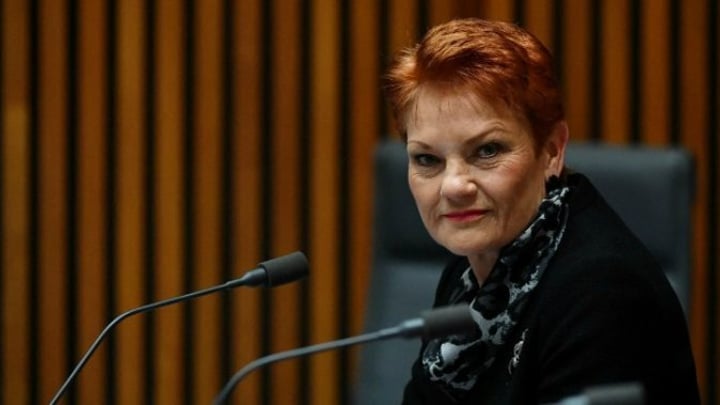 The One Nation leader was blasted earlier this week by Trump's administration.

Australia’s most well-known redhead Pauline Hanson covered her fiery locks, along with the rest of her body, with a full burqa when she turned up to parliament this afternoon.

The One Nation leader calmly took her place in the chamber wearing the full body covering which hid her head, face and limbs.

Pauline Hanson entered the Senate like this….. #auspol pic.twitter.com/n77zxtU1Pt

Reportedly, the noted critic of Islam identified herself to security before entering the chamber.

SBS news reported that she entered the Senate just after Question Time began and audible groans could be heard as she entered.

Someone was heard saying: “What on earth?”

Hanson removed the burqa a few minutes later as she asked Attorney-General George Brandis if he’d ban the burqa.

“There has been 13 foiled national threats against us with terrorism,” she told the Senate.

“Will the Attorney-General ban this burqa?”

“You are not an adherent of the Islamic faith,” Brandis said. “I would caution you and counsel you. Be very, very careful of the offence you may give.”

In response to Hanson’s dress-up antics, Independent Darryn Hinch then asked President of the Senate Stephan Parry whether he too could come to the chamber wearing fancy dress since Hanson was not in fact a Muslim.

His response was that he would not interfere with what Senators wore.

US Secretary of State Rex Tillerson introduced his department’s annual report on global religious freedom on Tuesday with his deepest criticism reserved for terrorists of Islamic State however, Hanson’s One Nation came under fire for its campaign platform.

The platform included “ceasing Muslim immigration, holding a royal commission on Islam, halting construction of mosques, installing surveillance cameras in mosques, banning wearing of the burqa and niqab in public places, and prohibiting members of parliament from being sworn in under the Koran.”

Hanson plans to move a motion in parliament later today calling on the federal government to ban the burqa.

What do you think of her stunt?