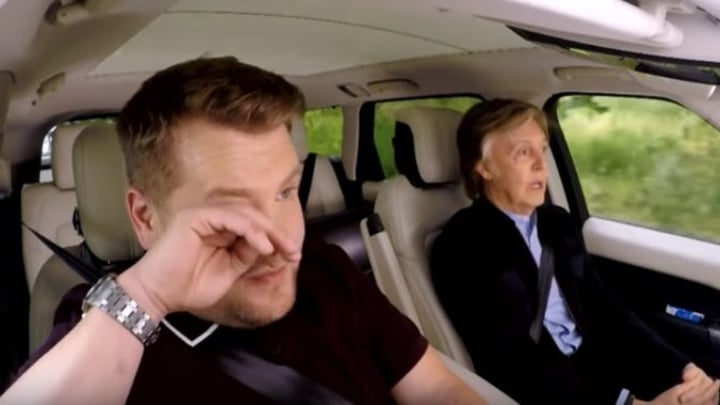 Beatles’ legend Sir Paul McCartney returned to his home city of Liverpool and gave TV host James Corden a personal tour of the iconic band’s old haunts as well as belting out some of their biggest hits.

McCartney showed Corden, 39, around the house he grew up in, visited a barber shop on the infamous Penny Lane and surprised a pub full of Scousers with a mini live concert during the appearance on Tuesday night.

The 24-minute clip sees McCartney sing some of The Beatles’ best loved tracks, including Penny Lane, Blackbird and Drive My Car, but it was his emotion-fuelled rendition of 1970 track Let It Be that left the British funnyman in tears. Corden could be seen wiping his eyes before telling McCartney, “it got me emotional there Paul. It’s too much for me.”

Paul opened up to the Gavin and Stacey star, telling him that the heartfelt song was actually written about his mother Mary, who passed away when he was just 14-years-old. He confessed that he had a dream in the 1960s where his mother visited him and told him to “let it be” which inspired him to write the song.

The song left Corden in tears. He then told the singer: “I can remember my granddad, who’s a musician, and my dad sitting me down and saying ‘we’re going to play you the best song you’ve ever heard. And I remember tham playing me that. If my granddad was here right now he would get a kick out of that.” To which Paul replied, “he is”.

The pair then went back to one of the Philharmonic Pub in Liverpool city centre where McCartney used to drink, and play gigs. He then surprised the punters by appearing on stage from behind a curtain and performing Hard Day’s Night. He also entertained the locals by singing classic Beatles’ tunes Nicotine, Love Me Do, Back In the USSR and Hey Jude.

Macca also performed his brand new track Come On To Me in the passenger seat of Corden’s Range Rover. He has also released a second new track titled I Don’t Know. He is currently preparing to release his 17th studio album, Egypt Station, which will hit shelves in September.

Are you a fan of Paul McCartney? Have you ever seen him, or The Beatles, live in concert?