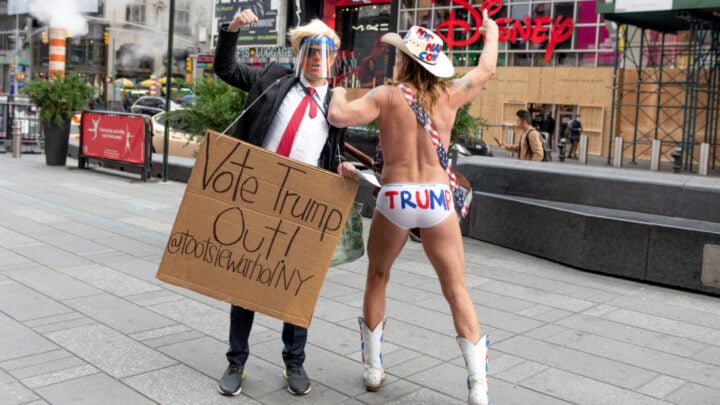 The first polls closed at 10am AEDT on Wednesday. Source: Getty.

The eyes of the world are on the United States of America this morning as people eagerly wait for the first results from the Presidential election to roll in. Indiana and Kentucky were the first polls to close at 10am AEDT however the final count has not yet been confirmed.

Meanwhile in Europe, following recent attacks in France and Austria, the United Kingdom has increased its terrorism threat level from significant to severe. This means that while there is no intelligence of an imminent attack, officials believe it is highly likely.

Home Secretary Priti Patel said the British people should be “alert but not alarmed”, reports the BBC. “This is a precautionary measure following the horrific events of the last week in France and last night in Austria and is not based on a specific threat, ” she said.

It comes just 24 hours after four people were killed in a shocking incident in the Austrian capital of Vienna, while 15 people injured in the attack, nine of whom are in critical condition.  The attack began with a barrage of gunfire near the Stadttempel synagogue at around 8pm on Monday.

At least one of the attackers has been confirmed dead and it has since emerged that the 20-year-old had a previous terror conviction for trying to join the Islamic State group.

Back home in Australia, Victoria has marked its fifth day without any community transmission of Covid-19 as the state marked another day with no new cases and no further deaths. Just over one week since lockdown restrictions were lifted, metropolitan Melbourne’s 14-day rolling average now sits at 1.7, while the average for regional Victoria remains at zero.

This will no doubt have a bearing on New South Wales Premier Gladys Berejiklian’s decision on whether to reopen the border between NSW and Victoria. According to the Sydney Morning Herald, a decision is expected to be made on Wednesday and it’s expected that the border could be open before December.