Man, 61, dies and wife seriously injured after being mauled by ‘son’s pet dog’ 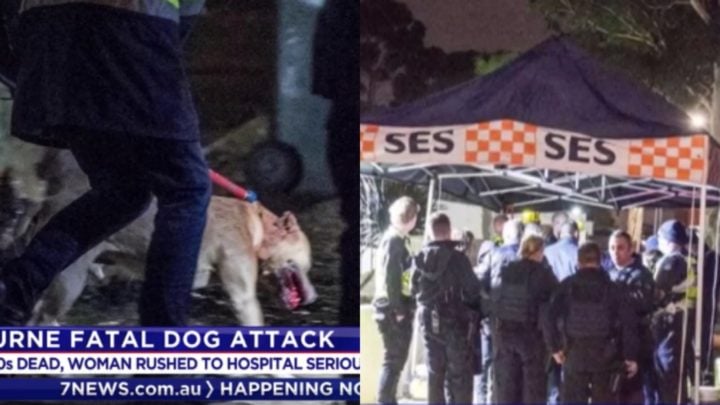 The dog is said to be an American Staffordshire Terrier. Source: 7News.

A 61-year-old man, reported to be wheelchair-bound, has been killed as a result of a dog attack at a property in Melbourne’s north east, while his wife sustained serious injuries.

Victoria Police confirmed the man’s death in a statement, revealing that officers, along with paramedics, were called to a property in the Mill Park area of the city on Wednesday evening to reports that a man had been attacked by a dog.

Upon arriving at the property on Ancona Drive, officers located a deceased man and a woman, also in her 60s, suffering serious injuries, and they fired shots in a bid to deter the dog from continuing its attack on the woman.

“Emergency services were called to a residential address on Ancona Drive about 6.40pm after reports that a man had been attacked by a dog,” a force spokesperson said.

“Shots were fired by members to deter the dog from further attacking the woman and members and it was contained in the premises.”

The dog, reported by the Herald Sun to be the pet of the couple’s son, is thought to be an American Staffordshire Terrier. It was contained at the scene before being secured by a ranger and seized by the council, where it is currently being held following the fatal incident.

Senior-Sergeant Glenn Parker allegedly told reporters at the scene that the owner of the dog has given consent for the animal to be put down, following the “out of character” attack.

A police spokesperson also confirmed that, due to shots being fired at the scene, an investigation has been launched by the Professional Standards Command.