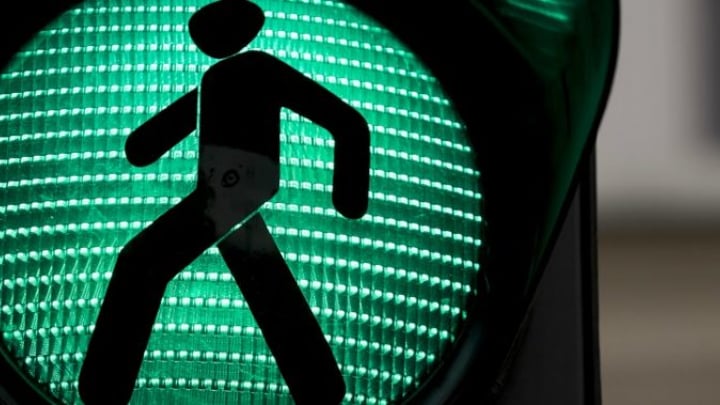 A Victorian lobby group claims that the pedestrian signal at traffic light is an example of "unconscious bias" against women.

If you’ve been watching the news today then chances are you might have heard about this.

A lobby group, the Committee for Melbourne, is claiming that the walking man symbol at traffic lights is an example of “unconscious bias” that “discriminates against women”.

The Herald Sun reports that the group is pushing for an equal number of female and male traffic light crossing figures across Victoria.

This week an initiative called Equal Crossings plans to install 10 of the female pedestrian figure at traffic lights in the Melbourne CBD.

But the plan and the motivation behind it has been criticised and ridiculed both in the media and on social media.

It seems everyone has an opinion on this one!

This morning it was a topic of conversation on Sunrise, where Sam Armytage admitted she didn’t even associate the pedestrian crossing figure with a specific gender.

“I’ve never thought about [the walking signs] as a man. I’ve always just seen it as a human.” she said.

“I have never in my 40 years on this planet stood at a set of traffic lights and thought ‘that is a man and I feel persecuted as a woman’.”

The Lord Mayor of Melbourne has also weighed into the debate, telling the Herald Sun that he wasn’t impressed.

“I’m all for doing anything we can for gender equity, but really?” he said.

“Unfortunately, I think this sort of costly exercise is more likely to bring derision.”

Even a member of the think-tank Institute of Public Affairs, Evan Mulholland, described it as political correctness gone mad, and argued the government should move on and come up with practical solutions to reduce traffic congestion instead.

But those arguing for the change believe it’s time something was done.

Committee for Melbourne CEO Martine Letts told the Herald Sun “unconscious bias” had an effect on our daily decisions and attitudes.

“The Equal Crossings initiative will draw our attention to these issues in a practical and positive way.

So, where do you stand on this issue?

Do you think there should be female pedestrian figures? Or do you think it’s PC going too far?