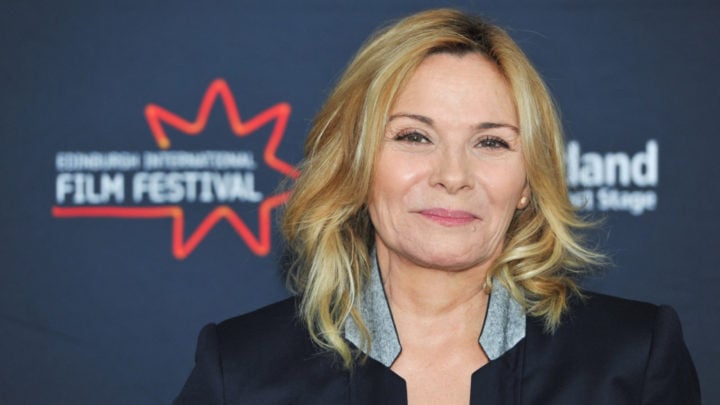 She’s best known for her role as the unapologetic, outspoken, sex-loving publicist Samantha Jones in iconic HBO series Sex and the City, and now Kim Cattrall has brought her beloved character back to life in a surprisingly saucy TV commercial.

In a commercial from 2017 which has recently resurfaced online, for Nintendo, Kim can be seen playing on her Nintendo Switch, wearing a sexy satin robe in bed. In the video, Kim says: “I’ve discovered a new way of enjoying my spare time …. run Marion, run!”.

Kim continues: “I go on magical adventures with a certain Mario. And guess what? He’s totally into dressing up. That tanuki suit is my particular favourite.”

Slipping into a little black dress, Kim puts the Nintendo Switch into her Chanel bag and says seductively to the camera: “There are many men in my life, but for a few minutes, or a few hours, I’ll always find time for Mario.”

Samantha was a firm favourite for many viewers of the show, thanks to the sexual hijinks she got up to throughout the six seasons of the series and two movies. From her countless dating disasters and crazy sexcapades to exploring a lesbian relationship and battling breast cancer, Samantha changed the narrative around what it means to be a single woman, so it’s little wonder Kim received a Screen Actors Guild Award and a Golden Globe for her portrayal.

But they shouldn’t get their hopes up for a SATC reunion any time soon. Kim has been very vocal about her reluctance to reprise the character, claiming she had been bullied by her former co-stars and hinting at a feud with the show’s lead actress, Sarah Jessica Parker.

Speaking to the Mail Online previously, Kim said: “I went past the finish line playing Samantha Jones because I loved Sex and the City. It was a blessing in so many ways, but after the second movie I’d had enough.”

When asked if there was any chance she’d appear in a third instalment of the SATC movie franchise, she quickly replied: “Never. It’s a no from me”.

Did you watch Sex and the City? Were you a fan of Samantha?