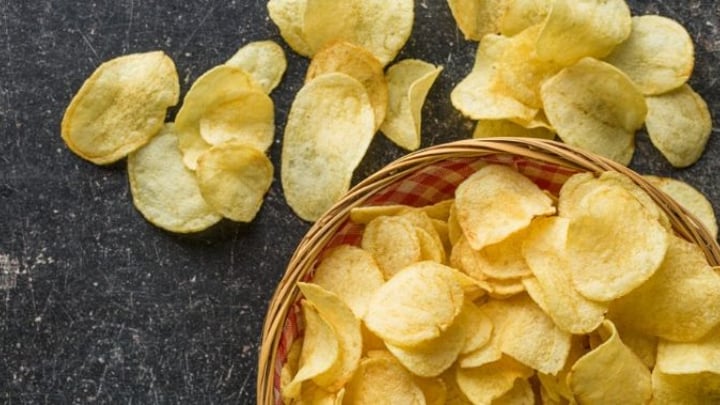 Potato chips are very yummy, to the detriment of our waistlines.

While it’s our opinion that nothing can beat good old Smith’s Crisps in Original flavour, sometimes it’s tempting to branch out into something more exotic.

But people who bought Kettle chips in Sea Salt and Rosemary and Sea Salt from Coles and Woolworths are paying the price – the New South Wales Food Authority has warned against eating the chips due to the “potential presence of foreign matter”, in this case, pieces of white plastic.

“Consumers should not consume these products,” the authority said of the potato chips, which were sold in New South Wales, Victoria and the Australian Capital Territory. “The products can be returned to the place of purchase for a full refund.”

The packets concerned were Kettle Sea Salt in 175 gram and 300 gram packets and Kettle Rosemary and Sea Sale in 175 gram packets, with a best-before date of November 11, 2017.

Kettle chips are made by Snack Brands Australia, which makes all of its products in Australia. The company’s own recall notice says that the rubber pieces may cause choking if consumed, and apologises for any inconvenience to customers.

You can get more information by calling Snack Brands on freecall 1800 806 128 during business hours.

Potato chips are Australia’s favourite snack food, with 2015 research showing almost half of all Australians eat them every week. But researchers at Roy Morgan found that we also tended to combine them with a soft drink, and both of which, when consumed regularly, aren’t great for our health.

“Over the last five years, potato chips’ status as the nation’s favourite snack food has remained unchallenged, with 42 per cent of the population (or 8.2 million people) now eating them in any given seven days,” the research house said. “Furthermore, 62 per cent of potato-chip snackers also consume some kind of soft drink during that time — well above the national average (48%).”

On the upside, however, the research found that the 50-plus age group were lower consumers of chips and drinks than other age groups, as health issues became more of a concern.

What are your favourite chips?