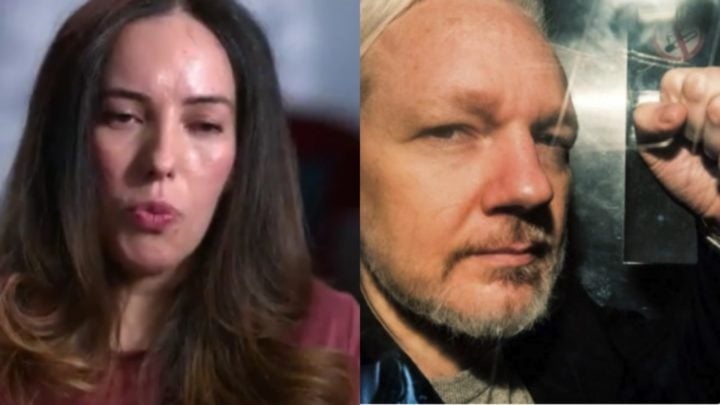 Wikileaks founder Julian Assange managed to fall in love and start a secret family all while he was holed up inside the Ecuadorian embassy in London. Now Assange’s secret fiance Stella Morris, 37, with whom he shares two sons, has opened up about their relationship and family life in a rare interview with Channel Nine’s 60 Minutes.

The South-African born lawyer has been in a relationship with the high-profile Wikileaks founder since 2015. The couple has two children together — Gabriel, three and Max, one – who were conceived while Assange was hiding out in the Ecuadorian embassy, where he was granted political asylum in 2012 until last April when he was dragged out and taken to prison.

“Yeah, it’s quite something that one of the most surveilled people on the planet managed to carve out space for a family and a partner,” Assange’s fiance Morris told 60 Minutes reporter Tara Brown on Sunday night. “It wasn’t easy, but I think if you’re with someone you love, you can make impossible situations possible.”

Speaking about the early stages of their relationship, Morris said she felt “fortunate” to have met Assange, who “had changed the world with Wikileaks”.

“We grew closer and became friends and watched movies together and I just loved spending time with him,” she said. “It was very romantic and cautious and very sweet.”

Morris also pleaded with the Australian government to help free Assange, saying: “I want people to understand we’re being punished as a family,” she said. “I’d like to ask Scott Morrison to do everything he can to get Julian back to his family.”

The 48-year-old is currently in prison in Britain, despite having already served his 50-week sentence for breaching bail eight years ago. Assange had been hidden away in the embassy since then to avoid extradition to Sweden to face questioning in a sexual molestation case.

However, last year that all ended when he was taken into custody and arrested by Metropolitan Police for failing to surrender to the court back in 2012. He was further arrested on behalf of the United States authorities after arriving at the central London police station in relation to an alleged conspiracy with Chelsea Manning. The former US intelligence analyst was also arrested in 2010 for disclosing more than 700,000 confidential documents to Wikileaks.