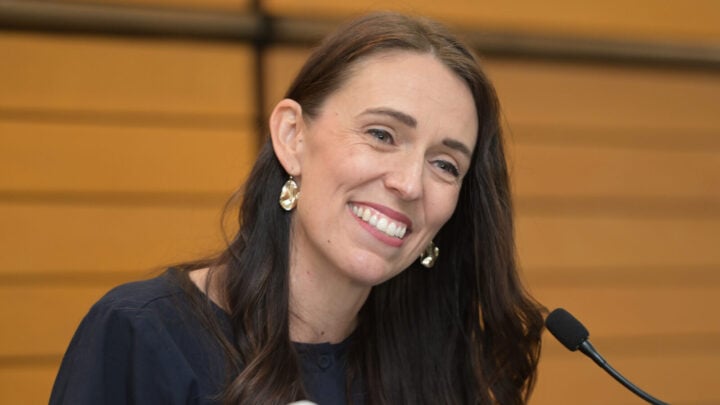 A day after sending shock waves across the globe with her announcement, Ardern told reporters that she "slept well for the first time in a long time last night". Source: Getty Images.

A noticeably more relaxed looking Jacinda Ardern has reflected on her resignation as New Zealand Prime Minister and how “deeply humbled” she is following the outpouring of support that followed her announcement.

Ardern made the shock announcement that she was resigning from her position on Thursday, January 19, claiming that she “no longer” has “that bit extra in the tank to do the job justice”.

Her final day in the position will be Tuesday, February 7.

“Being Prime Minister has been the greatest honour of my life and I want to thank New Zealanders for the enormous privilege of leading the country for the last five and a half years,” Ardern said during her announcement.

“I have given my absolute all to being Prime Minister but it has also taken a lot out of me. You cannot and should not do the job unless you have a full tank, plus a bit in reserve for those unplanned and unexpected challenges that inevitably come along.

“Having reflected over summer I know I no longer have that bit extra in the tank to do the job justice. It’s that simple.

“I have spoken to the Governor-General this morning to let her know.”

A day after sending shock waves across the globe with her announcement, Ardern told reporters that she “slept well for the first time in a long time last night”.

“There’s still a range of emotions. I of course feel sad but also I do have a sense of relief,” she said.

“I don’t doubt the decision.”

Following the announcement, fellow high profile figures took to social media to reflect on Ardern’s impressive political career while wishing her all the best.

Jacinda Ardern has shown the world how to lead with intellect and strength.

She has demonstrated that empathy and insight are powerful leadership qualities.

Jacinda has been a fierce advocate for New Zealand, an inspiration to so many and a great friend to me. pic.twitter.com/QJ64mNCJMI

Jacinda Ardern will be remembered for guiding her country with strength, compassion, and grace through multiple historic crises, doubtless saving countless lives.

She’s shown the world a new model of powerful leadership. A true stateswoman.

#PrimeMinister @jacindaardern resigned today. I am not surprised nor do I blame her. Her treatment, the pile on, in the last few months has been disgraceful and embarrassing. All the bullies, the misogynists, the aggrieved. She deserved so much better. A great leader. Thanks PM! pic.twitter.com/7b1AhjBXrW

GUTTED
I mean, I understand but…

Wish you all the best you fabulous woman!

You have raised the bar in terms of humane leadership

Your strength kindness and humour a gift to us all

Ardern spoke of how “deeply humbled” she was following the reaction to her resignation.

“To have those messages of gratitude has been really moving for me and for my family,” she said.

Ardern served as the 40th Prime Minister of New Zealand and leader of the Labour Party since 2017.

She joined the Labour Party at the age of 17 after graduating from the University of Waikato in 2001, where she worked as a researcher in the office of Prime Minister Helen Clark.

Ardern was first elected as an MP in the 2008 general election, when Labour lost power after nine years. She was later elected to represent the Mount Albert electorate in a by-election on February 25, 2017.

Ardern was unanimously elected as deputy leader of the Labour Party on March 1, 2017, following the resignation of Annette King. A mere five months later, Labour’s leader Andrew Little resigned after a low opinion polling for the party, with Ardern elected unopposed as leader in his place

Labour saw a considerable rise in popularity after Ardern became leader, she led her party to gain 14 seats at the 2017 general election on September 23, winning 46 seats to the National Party’s 56.