‘It’s my turn to make decisions for my health’: Wally Lewis to step away from sports presenter role 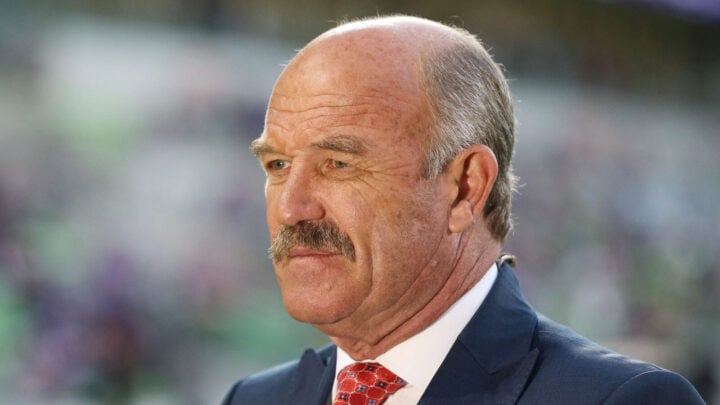 Wally Lewis revealed that although he will be taking "more of a backseat role in the studio" he will still keep audiences "up-to-date on the highs and lows of local and international sport". Source: Getty Images.

After more than two decades as Queensland Sports Presenter with 9News, rugby league legend Wally Lewis has announced he is stepping down from the role, citing health reasons for his decision.

Lewis joined the network in 1999 but a number of health issues which include his ongoing battle with epilepsy and a seizure while on air in 2006 drew concern for the 63 year old’s health.

According to TV Blackbox, Lewis will remain with the network but “will not return to the studio in 2023”.

Lewis revealed that although he will be taking “more of a backseat role in the studio” he will still keep audiences “up-to-date on the highs and lows of local and international sport”.

“Beyond 9News, I’ll continue to call WWOS home, and there are some special Nine programs in the pipeline that I’m also ready to tackle alongside my ongoing involvement with the QRL and FOGS (Former Origin Greats).

“It’s safe to say that no two weeks in my calendar will look the same this year, which is what I’m looking forward to most.”

For those loyal fans who are worried Lewis will be missing from their screens, Nine Queensland Director of News, Amanda Paterson assured viewers that “the King is well and truly here to stay.”

“He continues to live up to being a legend on and off the field, and whether he is on the news desk or not, viewers will still get to welcome the Wally they know and love into their living rooms,” Paterson said.

“Wally is such an integral member of our newsroom and we are privileged to have him on our team. His health is and has always been our priority, so we are proud of him for making the call to put himself first.”

Lewis’ replacement on the sports desk is expected be announced in the coming weeks.

Prior to his career with 9News, Lewis made a name for himself as one of the greatest ever players of rugby league.

Lewis represented Queensland in thirty-one State of Origin games from 1980 to 1991, and was captain for thirty of them.

He also represented Australia in thirty-three international matches from 1981 to 1991 and was national team captain from 1984 to 1989.

Lewis played a major role in Queensland’s success in the State of Origin series throughout the 1980s, winning the Man of the Match a record 8 times.

In recognition of his stellar sporting career, Lewis was inducted into the Sport Australia Hall of Fame in 1987 and became the sixth member of ‘The Immortals’ in 1999. In 2000, he was awarded the Australian Sports Medal for his contribution to Australia’s international standing in the sport of rugby league