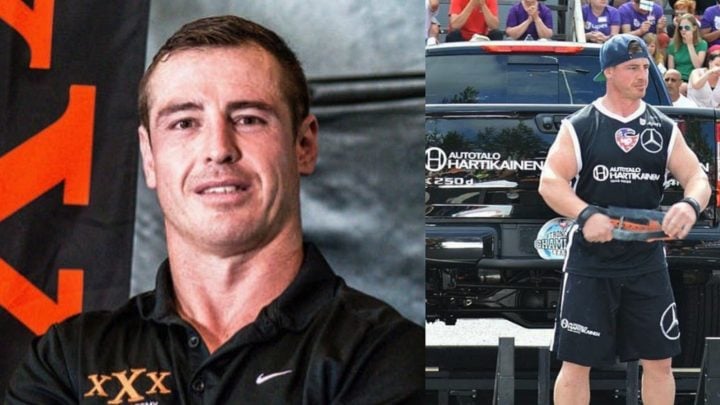 A man who died during an alleged home invasion in Sydney has been identified as personal trainer and former 2017 Asia’s Strongest Man champion, according to multiple reports.

New South Wales Police confirmed just hours ago that a male intruder died inside a home at Westwood Court on Sunday morning. The male resident of the home, Johan Schwartz, was woken at around 7:30am to his dog barking and found the intruder inside his house. His wife and baby were also inside the family home at the time.

Schwartz was later released without charge by police but awaits more news on whether he’ll face further prosecution, pending an autopsy.

Now tributes have been pouring in from the shocked family and friends of weightlifter Brad Soper, 35, who, according to the Daily Telegraph, has been identified as the man who died. They have insisted it’s completely out of character for him – with his father claiming he was “disorientated” at the time.

“It is with the greatest sadness and shock to announce the passing of Brad Soper, our coach, our colleague and our friend,” the post read. “This news has absolutely devastated us all and we are going to miss him beyond words. His knowledge, encouragement, strength and all of the laughs and fun in between.

“Brad’s dedication to his sport and training was nothing short of inspiring, he always put in the work to achieve his goals! His passion was to learn as much as he could and share everything he knew with his clients!

“Each and every one of them will be grateful for what he’s given them. Sending all of our love to his family and friends at this heartbreaking time. Forever our Strongman. RIP.”

Meanwhile, Soper’s father told the Daily Telegraph he was shocked but wanted to await autopsy results to determine how it could have happened.

“We want to wait until the autopsy is done,” he told the news outlet. “What happened is right out of context for Bradley. We believe he was disorientated for some reason and they won’t know until they do the autopsy.”

Meanwhile fellow personal trainer Peter Tsikas told the ABC he was “pretty shocked” by the news and described him as a “big teddy bear” before adding: “He was a kind man, he always looked after everyone else first. It doesn’t make sense and that’s why we’re trying to put the pieces together, because we don’t know what’s happening – it just doesn’t seem right.”

While the father who lived at the home awaits news over whether he’ll be prosecuted, many people have spoken out to defend him – insisting he was simply defending his family at the time.

“Good on him for protecting his family,” one person wrote on social media according to 7 News, while another added: “He did what he had to do. Anyone would do the same.”

Detective Chief Inspector Shane Woolbank told reporters on Monday: “Generally, people are entitled to their home and they’re entitled to use reasonable force to protect themselves and their property.”

An autopsy is expected to determine if the force used was “reasonable” or excessive.