‘I ran out of gas’: Novak Djokovic’s staggering loss in clay-court opener 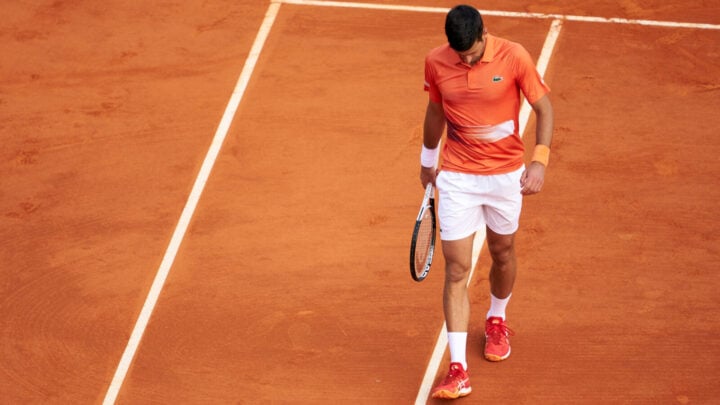 Novak Djokovic has lost in an overwhelming defeat at the Monte Carlos Masters. Source: Getty

Novak Djokovic lost his opening match in just his second tournament of the year at the Monte Carlo Masters clay courts on April 12.

He suffered an overwhelming defeat of 6-3 6-7 (5-7) 6-1 to Spaniard Alejandro Davidovich Fokina, dropping his serve nine times.

The moment @alexdavidovich1 secured the biggest win of his career against 2x #RolexMCMasters champ Djokovic! pic.twitter.com/fdXvA55g6o

The world number one graciously accepted his defeat to 46th-ranked Davidovich Fokina and acknowledged his opponent’s skill.

“He was the better player,” Djokovic said.

“I just ran out of gas completely … If you can’t stay in the rally, not feeling your legs on the clay, it’s mission impossible.”

The Serb and the Spaniard have faced each other twice before, with Djokovic coming out on top, but Davidovich Fokina said he was supposed to face off with the veteran player sooner.

“I’m so happy for the win today,” Davidovich Fokina said. “I missed [Djokovic] on the tour.”

Djokovic has been firm in defending his choice to remain unvaccinated, causing him to miss out on previous tennis tournaments in Indian Wells, California, and Miami.

His vaccination status excluded the tennis star from defending his Australian Open title when he was deported in January 2022, after being granted a medical exemption.

Djokovic was backed by the President of Serbia Aleksandar Vučić, who was outspoken in pressuring Australia not to deport his country’s champion.

Upon his return home, Djokovic met with President Vučić, thanking the leader for the support from his home country.

“I wanted to meet with you today because, primarily as a citizen of Serbia, I felt a great need to thank you for the great support that you, as the president of Serbia, gave me, as well as all state institutions during the unfortunate events in Australia,” he said.

“Although I was alone in detention, and faced with many problems and challenges, I wasn’t feeling lonely.

“I had huge support primarily from my family, all of the close people in my life, entire Serbian nation, many people with good intentions from the region and the world.”

Both France and Monaco relaxed Covid 19 restrictions in March 2022, allowing Djokovic to compete on the clay courts and allowing him to return to the French Open in May 2022.

Do you think Djokovic will redeem himself at the French Open?