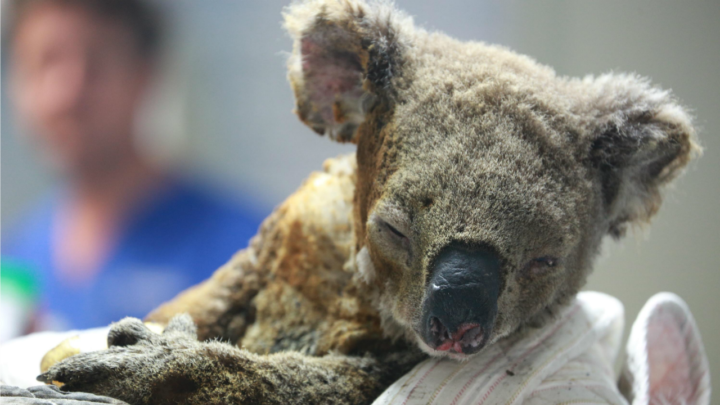 A woman who was filmed saving a koala from a raging bushfire has been praised online for saving its life.

Incredible video footage shows the woman, identified by 9News as Toni Doherty, rushing to pick up the badly burned koala, using her shirt to grab the terrified animal. The koala, since named Lewis, was then given water before being wrapped in a blanket.

According to the news outlet, the koala was then taken to Port Macquarie Koala Hospital where it remains in a critical condition.

The video, which was shared to Facebook on Tuesday by 9News, has since gone viral with many praising the woman for her bravery.

“This lady needs to be recognised what a beautiful soul,” one commented. “Thank you for assisting the koala in these terrible fires.”

“This is so heartbreaking! Well done to the lady that helped the koala. It’s just so devastating,” another added, while a third wrote: “Respect to the lady who looks like she actually took her top off to wrap around and helped this little guy. So glad she was there to help but so sad to think not all wildlife were this lucky.”

Meanwhile, 9News reporter, Lizzie Pearl, said in a tweet on Wednesday that Lewis is still suffering from some serious burns.

She wrote: “Lewis is around 14 years old … he’s well enough to have a munch on some eucalyptus leaves this morning. Is still suffering some serious burns after being rescued from a bushfire yesterday.”

Lewis is around 14 years old … he’s well enough to have a munch on some eucalyptus leaves this morning. Is still suffering some serious burns after being rescued from a bushfire yesterday. 🐨 @9NewsSyd pic.twitter.com/OFzX9PqfeW

According to a News.com.au report, up to 350 koalas may have been killed in bushfires near the Port Macquarie region, where Lewis was saved. The Port Macquarie Koala Hospital has since started a GoFundMe page to raise money to help koalas that have been effected by the fires, raising more than $900,000 so far.

The death toll from the bushfires is currently sitting at four, after locals near Kempsey, NSW, found the body of a 58-year-old man in burnt-out bushland last week. The man has since been identified as Barry Parsons, who had been renting a shed in the area and lived alone.

Mr Parsons’ body was found on the southern end of the Kyuna Track at Willawarrin, around 34 km from Kempsey. He is the fourth person to have died as a result of the bushfires in NSW, after two people were confirmed dead in Wytaliba and a third body was found north of Taree over the weekend.

According to ABC News, the first confirmed victim was grandmother-of-six Vivian Chaplain, 69, who passed away in hospital on Saturday after sustaining severe burns while trying to protect her home from the flames. A man named George Nole also died near Wytaliba, with his body found in a burnt-out car.

The third victim was named by the ABC as 63-year-old Julie Fletcher whose remains were found in a burnt-out building at Johns River.

What are your thoughts on this story? Do you think this was brave?