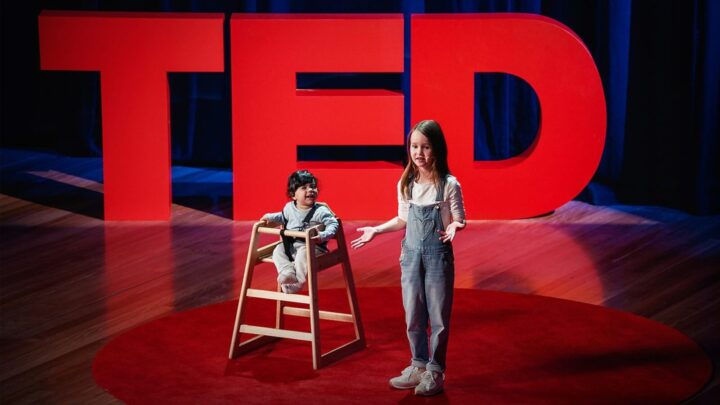 Molly Wright, 8, looks certain to be a voice of the future, after topping the TED Talks list for 2021. Source: TED.

Molly Wright was only 7 when she became the youngest person ever to deliver a TED talk – joining the ranks of the likes of Clive Palmer, Bill Gates and Stephen Hawking who have also spoken at the influential global forum.

The Queensland primary school student’s speech on how parents and carers can better connect with children under five has now been viewed 50 million times on social media since she presented it in July 2021, making it the most popular TED Talk of 2021.

Her address, How Every Child Can Thrive by Five, commissioned by Australian philanthropic group, the Minderoo Foundation, has also been watched more than 4.8 million times on TED’s own website – and has been translated into 33 languages.

Her top tips for helping adults to engage with, and create meaningful connections with, young children as their brains are developing, clearly hit home.

Molly’s key plea was for parents to put down their phones and “actually interact” with their children.

In her talk – which was directed by Greatest Showman director Michael Gracey – the Grade 2 student and child actor, also highlighted the benefits of play on lifelong learning, behaviour and well-being and shared strategies to help young kids thrive by five with the help of one-year-old Ari and his dad, Amarjot, who joined her on stage to “illustrate her big ideas about brain science”.

Launched in 1984 in California, TED Talks are inspirational live speeches from expert speakers across the fields of education, business, science, tech and creativity, that are recorded as videos and hosted on-line in the TED Talks’ massive library.

Molly, who has said that her high-profile address only took her one week to prepare, told the ABC that she had not been expecting her talk to top the list.

“I don’t think it’s sunk in yet. It’s been a crazy whirlwind of a year,” she told the ABC.

Ally Wright revealed that she and her daughter had “received responses from people all over the world, who said Molly’s talk and resonated with them”.

So what’s next for this clearly going-places young Queenslander?

More time in the spotlight, it seems.

“In 2022, I would be keen on more public speaking on the topic of more early education, wildlife and reading — I love reading,” said Molly.

Will you be listening to Molly's top-ranking TED Talk?