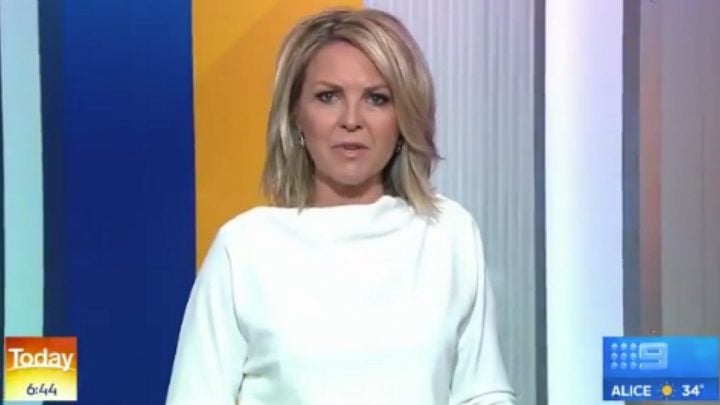 Georgie Gardner has ended her time with the Today show, with colleagues Deb Knight and Tom Steinfort farewelling her from the show on Monday morning. Source: Twitter/ The Today Show

Georgie Gardner was notably absent from her role as co-host on the Today show on Monday morning, just days after it was revealed that former presenter Karl Stefanovic would be making a comeback to the show in the new year.

Over the weekend it was confirmed that Georgie and co-host Deborah Knight would no longer present the morning show, with Nine describing their appointment as a “decision that regrettably has not worked”. And it appeared that Georgie, 49, had made the choice to leave with immediate effect, as Deb Knight held down the fort with fellow Nine star Tom Steinfort on Monday.

However Knight – who will stay on with Nine in 2020, despite no longer anchoring the popular breakfast show – continued to carry out her duties this morning, ahead of Stefanovics’ return to his former role at the start of next year, this time with new co-host Allison Langdon.

In an awkward moment on Monday morning, Deb and Tom farewelled their colleague and commended her for her efforts in trying to improve the show’s ratings, claiming she “gave it a red hot go”.

“We wanted to acknowledge our colleague and friend, Georgie Gardner,” Knight began. “You might have read over the weekend that Georgie has left the show. After a really challenging year, we want to wish Georgie all the very best.”

Steinfort then chimed in adding: “She has been a committed and passionate member of the team here. I think particularly when she’s been sharing the stories of everyday Australians who are doing it tough. These are issues that she wanted to focus on.

“She has always been a woman of strength here, a woman of class – and also who could forget that very wicked sense of humour that would just pop up from time to time as well?”

While a shock for the rest of Australia, Knight claimed that Georgie is making the most of her time away from the camera, as she prepares to take the next step in her career. She added: “Georgie is enjoying the time with her family, friends, taking Wilbur the dog [for a walk] and we look forward to seeing you on our screens again soon.”

It’s not just Georgie and Deb who are bidding farewell to the show though, as sports reporter Tony Jones also announced his departure from the program on Monday. Opening up about his decision to resign, Jones told the Herald Sun it was time to take a step back from his busy workload.

“It’s certainly been a wild ride over the past year, but I’ve thoroughly enjoyed my time working on the Today show,” he explained to the publication. “However, I came to the conclusion several months ago that juggling those commitments, together with Nine News, Sunday Footy Show and 3AW, was not sustainable. Something had to give.”

While Gardner and Knight are yet to announce where their careers will take them next, Jones told the Herald Sun he will still have some involvement with the Today show, reporting occasional Melbourne-based stories. Nine’s Director of News confirmed that despite the reshuffle, the whole Today team would be remaining with Nine, with the rest of the new line up set to be announced in due course.

Following the news, Stefanovic spoke out about his return to the show in a statement obtained by Starts at 60. He said: “Going back to the Today Show is not something that I thought would come up again. I thought my time was up but then when I was sounded out about it, it got me thinking. It’s a big job with enormous pressures and I know only too well some of those pitfalls, but it is also without question the best live job in Australia.”

Stefanovic officially left the Channel 9 show before his wedding to shoe designer Jasmine Yarbrough in December last year, with Knight replacing him alongside his former co-host Gardner.

What do you think of the change to the hosting panel? Do you like watching the Today show?