‘Not vicious’: Family of man mauled to death by pet dog breaks silence 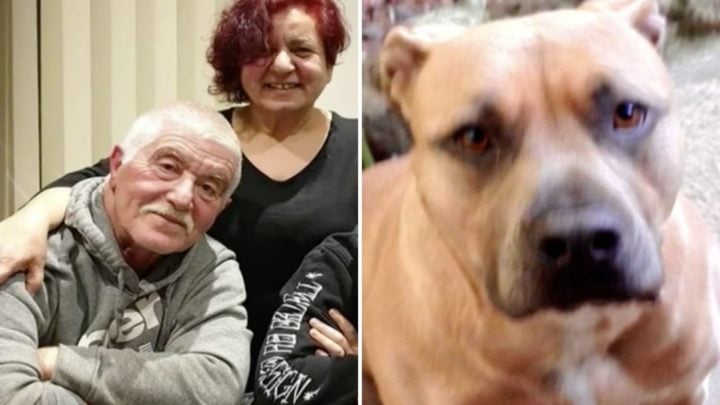 Leo was killed by his pet dog (right) earlier this week, while his wife Donata was severely injured in the attack. Source: 9 News Melbourne

The family of a 61-year-old Melbourne man who was mauled to death by his pet dog have broken their silence, insisting the pet wasn’t vicious.

Leo Biancofiore was confirmed dead on Wednesday night as a result of a dog attack at his property in Melbourne’s north-east, while his partner Donata also sustained serious injuries during the attack.

Victoria Police were called to the home in the Mill Park area of the city at around 6.40pm on Wednesday to reports of a dog attack and upon arrival located a deceased man and his seriously injured wife. She was transported to the Royal Melbourne Hospital for treatment.

Issuing a statement to 9 News Melbourne, Leo’s daughter-in-law Dani Marsh-Biancofiore said her father-in-law and the eight-year-old American staffy named Junior were inseparable. She described the dog as “precious” and that the dog and owner really loved each other.

“He was not a vicious dog in any way and this situation is the last thing any of us could have ever imagined,” the statement read.

Meanwhile, Leo was remembered by his family as “an amazing man” who “would do anything for anyone”.

Acting Victorian Premier Lisa Neville said despite the latest attack, it would be very difficult to restrict the breed in Australia. At present, Japanese Tosas, American Pit Bull Terriers, Perro de Presa Canarios, Dogo Argentinos and Fila Brasilieros are the only breeds banned in Victoria. Meanwhile, Junior has been put down following the attack, while Donata recovers in hospital.

The attack has sent shockwaves through the local community, with neighbours previously sharing their condolences to the family following the incident.

“I’m gonna [sic] miss him a lot, he’s a lovely person, I don’t think anyone in the street is lovely like him,” neighbour Princeza Nincovsk told 10 Daily.

Another local added: “He’s a Collingwood fan, always laughing about magpies and stuff… we’re going to miss him a lot.”

A fellow neighbour told The Age: “We would talk every second day when I went to Woolworths. He’s always out working in the garage. He’s been a very lovely person. We will miss him a lot, especially my husband. We love him.”

Issuing a statement on Facebook, Dogs Victoria explained it was “distressed” about the incident.

“Dog attacks are shocking for all involved and we wish to offer our sincerest condolences to the family, friends and first responders affected by this tragedy,” Dogs Victoria President Wayne Fleming said.

The American Staffordshire Terrier Club of Victoria also issued a statement and said it was “horrified” by the attack, but said the entire breed shouldn’t be punished.

“We need to remember that it’s the act itself that is what needs to be under the spotlight, not the breed,” the statement read. “Any incident needs to be treated on an individual basis and not under an umbrella as to try and tarnish a particular dog breed.

“Our thoughts go out to the family and all connected in light of this horrible event.”

Have you been following this story? What do you think needs to be done to stop dog attacks?