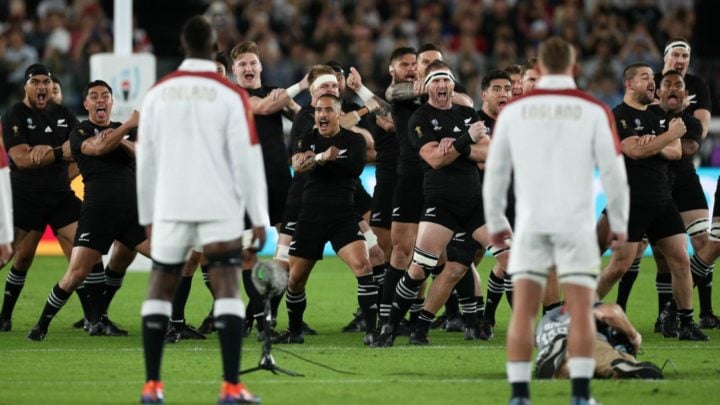 England’s rugby team pulled off a shock win against New Zealand’s All Blacks during their World Cup match on Saturday night – but it was their surprise move during their opponents’ Haka that is making headlines around the world today.

While the All Blacks gathered in front of their opponents to perform the iconic routine, rather than standing in a line which most teams normally do when facing the intimidating war dance, England instead formed a huge ‘V’ shape. And while rules state they can’t step over a certain point, some of the players had to be pulled back as they got too close to New Zealand’s men.

At one point the referee was seen warning player Joe Marler and his teammates to move back – something captain Owen Farrell has since confirmed was simply a misunderstanding. However, he has admitted the ‘V’ formation was planned by former Wallabies coach Eddie Jones, not to disrespect New Zealand, but to prove they wouldn’t stand back without a fight.

Farrell has since gone viral himself thanks to his reaction, as he was seen smiling throughout the Haka. He later told reporters: “We knew we had to be within a radius… We wanted to not just stand there and let them come at us. We wanted to keep a respectful distance, and be respectful of that, but we didn’t want to just stand in a flat line.”

Player Mako Vunipola confirmed it was Jones’ idea. He added: “We wanted to be respectful but we wanted to also make sure that they understood that we would be ready for the fight.”

Commentators were clearly stunned by the move at the time, as Wallaby great Tim Horan said: “Here’s something new, the referees are asking them to go back over the half way line. The English aren’t moving.”

England went on to pull off a major win against the incredible All Blacks, going home with a score of 19-7. However, All Blacks captain Kieran Read has since insisted the surprise move at the start had nothing to do with it.

“It had no impact on the game,” Read said. “That’s what they wanted to do so that’s what they did. They dominated the breakdown so we couldn’t get quick ball. They did a good job.”

There was a mixed reaction to England’s defiant response, with one person writing: “England choosing not to bow at the altar of the Haka was beautiful.” And one added: “Surprised England are getting criticised for their reaction to the Haka. For mine, too many teams are submissive when the All Blacks perform it.”

However others slammed the reaction as “disrespectful” with one person writing: “Owen Farrell is a disrespectful p***k for this. The Haka is a Māori tradition; England’s two fingers up is just bad sportsmanship. Disgusting.”

Meanwhile, the New Zealand Herald‘s front page on Sunday mirrored the sombre mood of its team at the end of the match, as it sensationally printed a completely black page with a tiny text box in the middle, simply reading: “The All Blacks are out of the World Cup. if you want to read more, go to the sports section.”