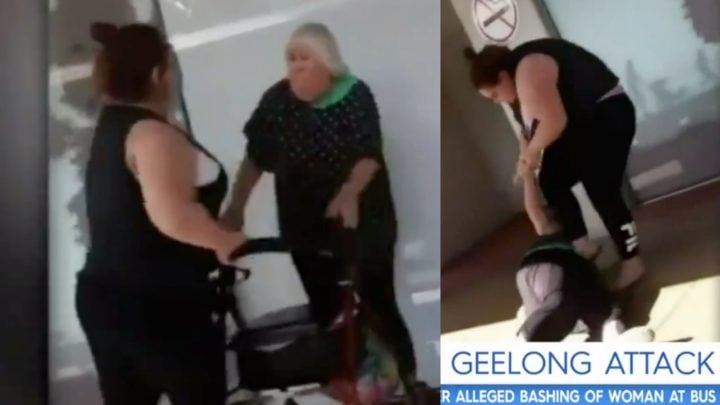 An elderly woman claims she was attacked outside shops. Source: Twitter/The Today Show.

An elderly woman has spoken out to claim she was “picked up like a doll and tossed to the ground” in an alleged attack by a younger woman, just days after shocking footage emerged.

Judith Green, 75, spoke to Nine News about the alleged assault, revealing she was waiting for a bus at the Market Square Shopping Centre in Geelong, Victoria, on Tuesday when she became frustrated about something unrelated so began banging her walker against a rubbish bin.

“This girl objected to it, she didn’t like me trashing the bin,” Green claimed. “The next thing I knew I was on the ground … she was like Hercules.”

Green claimed she now has a bruised face and hand and added to Nine: “She picked me up like a doll and tossed me to the ground.”

Footage emerged this week of the alleged incident, showing a woman appear to pull an elderly woman to the ground.

Greencross appeared in the Geelong Magistrates Court via video link on Wednesday.

It comes after she appeared at a bail hearing just days before, where she claimed she was suffering an epileptic fit at the time and had no control of her body.

However Senior Constable Shannon Thompson reportedly told the court that Greencross told police she was acting in self-defence, claiming the victim had threatened her with a needle.

She was denied bail.