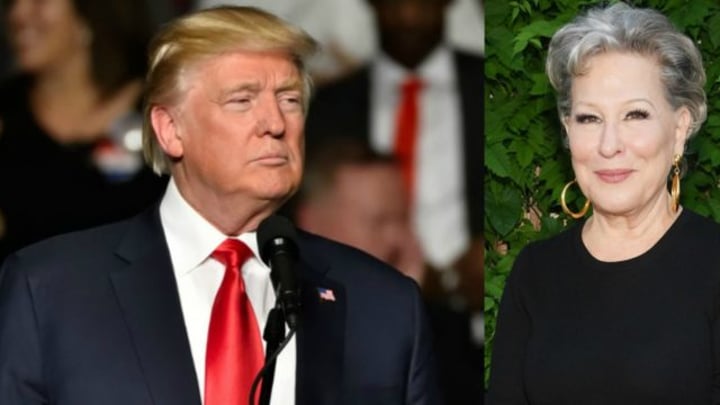 The US President lashed out at the 73-year-old Grammy winner after she shared a fabricated quote on social media. Source: Getty.

He may currently be in the United Kingdom, rubbing shoulders with Her Majesty the Queen and members of the royal family, but that didn’t stop President Donald Trump from unleashing on social media, branding Bette Midler a “washed up psycho” and a “sick scammer”.

Taking to Twitter in the early hours of Wednesday morning (local time), the President of the United States lashed out at the 73-year-old Grammy winner after she shared a fabricated quote on the social media platform which she believed had been uttered by the 72-year-old Republican.

“Washed up psycho @BetteMidler was forced to apologize for a statement she attributed to me that turned out to be totally fabricated by her in order to make “your great president” look really bad,” he wrote earlier today. “She got caught, just like the Fake News Media gets caught. A sick scammer!”

Prior to Trump’s public bashing, the ‘Wind Beneath My Wings’ singer actually issued a public apology on Monday in relation to the meme which purportedly included a quote from an alleged interview Trump gave to People magazine in 1998. It read: “If I were to run, I’d run as a Republican. They’re the dumbest group of voters in the country. They believe anything on Fox News. I could lie and they’d still eat it up. I bet my numbers would be terrific.”

Midler previously shared the quote online however, upon realising it was actually a fake meme doing the rounds on the Internet, the Hocus Pocus star said sorry and tweeted: “I apologize [sic] this quote turns out to be a fake from way back in ’15-16. Don’t know how I missed it, but it sounds SO much like him that I believed it was true!”

I apologize; this quote turns out to be a fake from way back in ‘15-16. Don’t know how I missed it, but it sounds SO much like him that I believed it was true! Fact Check: Did Trump say in '98 Republicans are dumb? https://t.co/NY9s6V49el via @rgj

This isn’t the first time the POTUS and Midler have taken aim at each other though, as the actress and singer regularly tweets about the American leader.

In February last year she targeted the former Apprentice star with a protest about President Trump’s calls to arm school teachers with fire arms, following the deaths of 17 people in a shooting at Marjory Stoneman Douglas High School in Florida on February 14 2018.

What are your thoughts on this story? Are you a fan of Bette Midler?