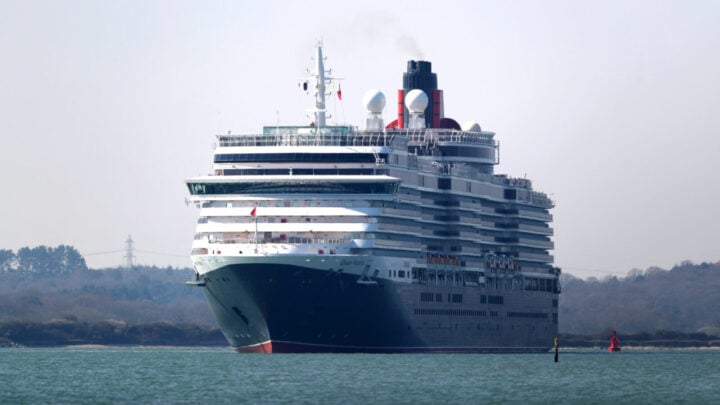 Cunard has been forced to cancel its upcoming Aussie season over border closures. Source: Getty

Cunard has cancelled its Australia and New Zealand season due to the ongoing uncertainty around Australia’s international border closures.

The British cruise line announced on Wednesday night it will refund passengers who’d booked trips on the Queen Mary, Queen Elizabeth and Queen Vitoria ships that were set to depart in 2021 and the beginning of 2022, and will offer incentives for those want to book again at the end of the year.

Cunard President Simon Palethorpe said the decision to cancel the “much-anticipated Australian season” had not been made lightly.

“We are extremely sorry for the huge disappointment cancellations will cause for all guests who have been affected,” he said.

Cunard said in a statement on its website that the company had hoped the kick off the Australia and New Zealand season after a successful summer in the UK.

“We had hoped to resume our homeports season out of Melbourne and Sydney,” it said. “Sadly, with the path to international cruising still unclear, this is no longer feasible and we have had to once again review our sailing plans across our fleet. ”

Last week’s announcement that Australia’s ban on cruise ships was extended for another three months hasn’t sat well with travel industry leaders, or holiday makers who have already forked out thousands on tickets and expenses.

Travel at 60s Chief Commercial Officer Wendy Harch said while Cunard’s decision was understandable given the uncertainty around Australia’s international borders, it was a disappointing blow for the hundreds of customers who had already booked their cruises for next year, as well as the local tourism industry which will miss out on millions while borders remain closed.

“So many Australian businesses rely on income from tourists hoping off cruises for day visits, and they’ve been trying to keep their head above water for over a year now.

“It’s not getting any easier though and the tourism industry needs direction from the government so business can plan their next steps and secure their livelihood.”

Meanwhile, Cruise Lines International Association (CLIA) says the ongoing suspension on cruises is putting 18,000 jobs at risk, and is estimated to have cost the Australian economy up to $6 billion since March 2020.

“The cruise industry has done an enormous amount of work to implement extensive new health protocols globally, but Australia is now the only major cruise destination in the world where there is no progress towards their adoption,” CLIA Managing Director Australasia Joel Katz said.

“The cruise industry is not asking for special treatment or to simply reopen the doors to cruising. We’ve presented some of the most stringent Covid-19 measures to be found anywhere in tourism, developed with the support of medical experts, and we need governments to take the next steps forward.”

The organisation has sent 40,000 emails to state and federal MPs as part of its Ready, Set, Sail campaign in a bid to help speed up cruising’s revival.

Speaking to Sky News on Thursday, Prime Minister Scott Morrison said Australians will have to get used to the current restrictions and that the international border would only reopen when Covid-19 hospitalisation rates have stabilised.

“If the virus is there, but the hospitalisations and the serious illness doesn’t occur and we see that on a sustained basis, well, that says that there is a potentially different pathway there,” Morrison said.

“It isn’t closed one day, open the next.”

Morrison said that even once the majority of Australians are vaccinated, variants like the Delta strain could keep borders closed until more is known about the vaccines’ effectiveness against them.

Minister for Trade, Tourism and Investment Dan Tehan told Starts at 60 the health and safety of Australians come first.

“Since the start of this pandemic, our government has made the health and safety of Australians our number one priority and closing the international borders has helped keep Australians safe,” he said.

“The government continues to consult with the states and territories and the maritime industry on options for the staged resumption of cruising when the medical advice says that it is safe to do so.”

Do you think the cruise industry should've been up and running by now?