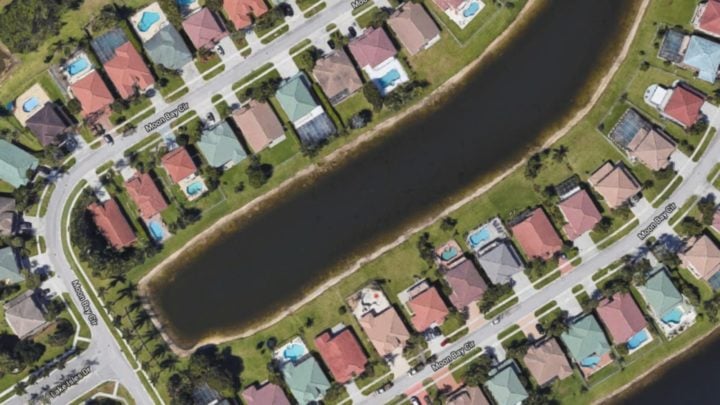 The remains of an American man who went missing more than two decades ago have finally been found after his submerged car was discovered on Google Maps. William Moldt, 40, was reported missing from Lantana, Florida in November 1997 after failing to return home from a night out. A missing person investigation was set up by police at the time but the case went cold.

Last month, a property surveyor spotted the submerged car while looking at Google Earth. According to a report by the Charley Project, which profiles unsolved missing people cases in the US, Moldt’s body was found inside the car, which was in a lake in a housing development in Wellington, Florida. The area was under construction at the time of his disappearance.

The Charley Project said in a statement that the “vehicle had plainly [been] visible on a Google Earth satellite photo of the area since 2007, but apparently no-one had noticed it until 2019”.

According to a report by the National Missing and Unidentified Persons System, seen by the BBC, Moldt went to a nightclub the night he disappeared and did not appear intoxicated as he left alone in his vehicle. “He also was not a frequent drinker but did have several drinks at the bar,” the report said.

Meanwhile, Palm Beach County Sheriff’s Office told the news outlet that “Moldt is presumed to have lost control of his vehicle and driven into the pond”. “You can’t determine what happened that many years ago, what transpired,” police spokeswoman Therese Barbera told the news outlet. “All we know is that he went missing off the face of the Earth, and now he’s been discovered.”

According to the BBC, Moldt’s family have been informed about the recent findings.

It comes after Queensland Police made a breakthrough last month with a 55-year-old cold case, charging an 80-year-old man – named by multiple reports as Vincent O’Dempsey – for the murder of Vincent Raymond Allen in 1964.

The Wacol resident appeared in Brisbane Magistrates Court in relation to the murder in the Queensland town of Warwick over five decades ago.  Vincent was last seen in a Holden sedan on Grafton Street in Warwick in April of 1964. He never showed up to a game with the Eastern Suburbs rugby league team.

Speaking about the ground-breaking discovery in a media conference at the time, Detective Senior Sergeant Tara Kentwell said they believe it could be the oldest cold case to be solved in Australia’s history. The detective could not provided further details on the 80-year-old man charged but commended police for their hard work in reaching this point in the case.

“I would caution any person out there responsible for a cold case murders to take no solace in the passage of time. This arrest is an example of our unwavering commitment to review and investigate Queensland’s unsolved homicides and to bring offenders to justice. Even after 55 years, murders can be solved,” she said.

The charge comes months after the Minister for Police and Corrective Services confirmed a $250,000 reward for information relating to the murder of Vincent. It formed an important component of the cold case review being conducted by investigators from the Homicide Cold Case Investigation Team and Brisbane region.

Vincent was last seen alive in a vehicle driven by a known associated man at around 5pm on April 18, 1964. He was never seen again and sadly despite a thorough investigation, his body was never located.

What are your thoughts on this story? Do you think this is crazy?