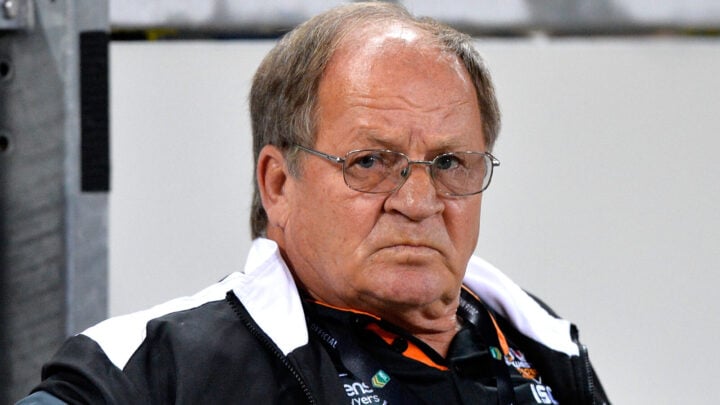 Famously tough NRL legend Tommy Raudonikis has died at the age of 70 after a long battle with illness.

The Sydney Morning Herald reported that the former Western Suburbs, Newtown, New South Wales and Australian rugby league star was with his partner Trish Brown when he passed away at 7.15am on Wednesday in a Gold Coast hospital. He was only six days short of his 71st birthday.

According to reports, Raudonikis underwent quadruple heart bypass surgery in 2006 and had also fought testicular cancer. He was diagnosed with throat cancer in 2014.

The Western Suburbs Magpies, where Raudonikis spent the first 10 years of his career, posted a heartfelt tribute to Twitter on Wednesday morning, tweeting, “@westsmagpies are saddened to learn of the passing of much loved Magpie Tommy Raudonikis. As both player & coach, Tommy has been at the heart & Soul of the Magpies and their supporters for 50 years. Our thoughts are with Tommy’s family.”

After leaving the Magpies, Raudonikis played for Newtown for three seasons. He represented NSW and Australia dozens of times, including as Kangaroos captain in 1973, during a period in which The Daily Telegraph called him “the dominant halfback of the 1970s”.

Raudonikis was awarded a Medal of the Order of Australia (OAM) in 1982. He later coached the NSW State of Origin team in 1997 and ’98 and also coached the Western Suburbs in the 1990s.

He remained a TV regular and until 2017 had a segment on the popular program The Footy Show. In 2019, he told Fox League’s League Life that his illnesses had taken a heavy toll, with throat cancer almost claiming his life in 2018.

“Six months, a year ago, I was gone,” he said. “The cancer had spread and got around my carotid artery … I’ve had cancer of the testicles, four bypasses, cancer of the vocal cords, cancer of the throat. But this last one… they couldn’t have any more radiation or chemotherapy.”

At the time, Raudonikis credited an experimental drug with allowing him to survive that near-death experience and extend his life.

The hashtag #RIPTommy and #cattledog – a tribute to a notorious game strategy he used as coach of the NSW team – were trending on Twitter on Wednesday morning as posts mourning Raudonikis poured in.

9News sports presenter Michael Atkinson wrote, “What a legend. Rugby League has continually lived off his character and passion for decades after he stepped away from playing and then coaching. He was ‘Rugba leeg’ through and through. Will be sorely missed, even by Qlders. Condolences to family.”

NewsCorp NRL writer Dean Ritchie tweeted that the loss of Raudonikis would “shatter our great game”.

Others remembered him as having an incredible fervour for rugby league that made him a fierce competitor, but was also a “knockabout” Aussie larrikin off the field.