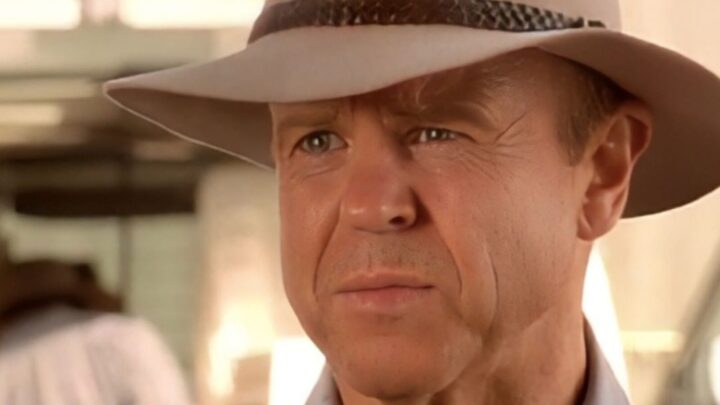 The entertainment industry is in mourning once again following the death of beloved McLeod’s Daughters’ star Marshall Napier who passed away on Sunday, August 14, at the age of 70.

Fans of Marshall received the devastating news after his daughter and co-star Jesicca Napier took to Instagram to share the news of her father’s passing.

“It is with great sadness that I share the passing of my beautiful dad Marshall Napier,” she wrote.

“After a short and intense battle with brain cancer, he left us this morning.

“He was peaceful and surrounded by family.”

His daughter went on to describe her father as “one of a kind” and admitted she would struggle to picture a world without him.

“Your charisma and charm was second to none. Your creativity and intellect was my inspiration,” she wrote.

“I love you so much and feel completely lost without you. I’m glad that you can soar free of the pain and confusion.”

“Sending my most sincere condolences to you. He was amazing as Harry Ryan and was one of my favourites, and I was so surprised when I connected the dots that “Harry” was actually “Becky’s” dad in real life. How special for you to have been involved in that together,” one fan wrote.

While another said: “I am just sitting here watching McLeod’s Daughters for about the 5th time with my 15-year-old daughter. I watched it for the first time when I was pregnant with her. Your Dad will always be Harry Ryan to us and as someone who lost their Dad too soon to cancer – I send all our love and eventually, you won’t forget but it will get easier.”

Many of Marshall’s McLeod’s Daughters co-stars also took to social media to pay tribute to the late actor.

Bridie Carter, the actress who portrayed Tess Silverman on the show, shared a photo of Marshall on her social media alongside the caption: “Vale beautiful, talented Marshall Napier. Our thoughts, prayers and love with Jess and the family.”

While his other co-stars left heartbreaking messages on Jessica’s post.

“What a commanding presence he was on a screen and stage. Always loved working with your Dad, a drier wit you could not find,” penned actor Rodger Corser.

“You will be so missed… you were and will always be one of a kind. The man. One of my first memories in the industry was laughing with you. Our hearts are with your family,” said Rachael Carpani, who played Jodi Fountain.

“I loved working with your dad. He was so generous with his time when I was just starting out in my career. He also had such a great sense of humour,” added actor Charlie Clausen, who played Jake Harrison.

Before his transition into acting, Marshall worked as a labourer and began his foray into acting when he moved from New Zealand to Australia in the 1980s.

Outside of Mcleod’s Daughters, other shows Marshall is known for are Bellbird, Babe, Come a Hot Friday, and Northspur. Marshall was also a respected theatre actor who in 2017 starred in The Sydney Theatre Company’s production of The Present alongside Cate Blanchett.

Marshall is survived by his wife, Beverly Napier, and their three kids Jessica, Rose, and James Reuben Napier.