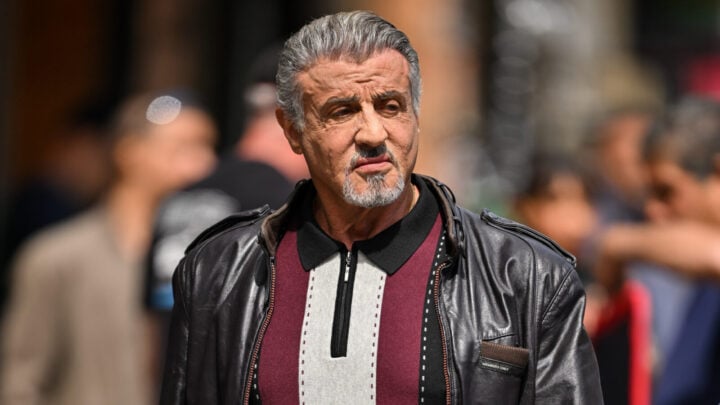 Sylvester Stallone, 75, is back in the Hollywood Spotlight as he films his new Paramount+ television series, Tulsa King.

The famed Rambo star is looking suaver than ever, pictured in an expensive dark navy suit, polished black dress shoes and stylish gold accessories as he casually smoked a cigar between takes on the New York City set.

The Rocky actor embraced his sexy grey locks as he sported a sophisticated slicked-back hairstyle and perfectly trimmed beard and goatee.

The dapper Stallone will play the role of mafia capo, Dwight “The General” Manfredi, in the highly-anticipated new series which “follows an Italian mobster who faces with the startling task of reestablishing his Italian mafia family in Kansas City, Missouri”, as described by IMBD.

Between sets, Stallone was also pictured enjoying a sweet moment with his eldest daughter, Sophia, as the stylish blonde bombshell popped by to see her legendary father doing what he does best.

The father-daughter duo looked the picture of blessed genes as they locked arms lovingly and smiled for the cameras.

Sylvester took to Instagram to share a snapshot of a Daily Mail article featuring his on-set shenanigans, as he revealed his daughters were “in town” to film their new reality TV show.

“Shooting Paramount + TULSA KING In New York City, and spending time with my daughter , SOPHIA , Who is in town with her sisters, Sistine and Scarlet to begin shooting a reality show,” Stallone wrote.

Fans were quick to respond to the post, praising Stallone for his age-defying looks and expressing their excitement for his upcoming TV series.

“You’re just as handsome as you were 40 years ago,” another commented.

“What an Italian stallion!”

Comedian and friend of Stallone’s, Andrew Dice Clay, also took to the post to comment with a cheeky message of praise for the actor.

“Best There is!!! And I’m Jealous Of All That Hair lol,” Clay wrote, to which Stallone replied, “Great to hear from you my brother”.

Stallone and his wife, Jennifer Slavin, share three daughters together, Sophia, 25, Sistine, 23 and Scarlet, 19. Stallone is also father to two sons, Sage and Seargeoh, from his previous marriage to Starlin Wright. Tragically, his eldest son, Sage Stallone, passed away from a heart attack on July 13, 2012.