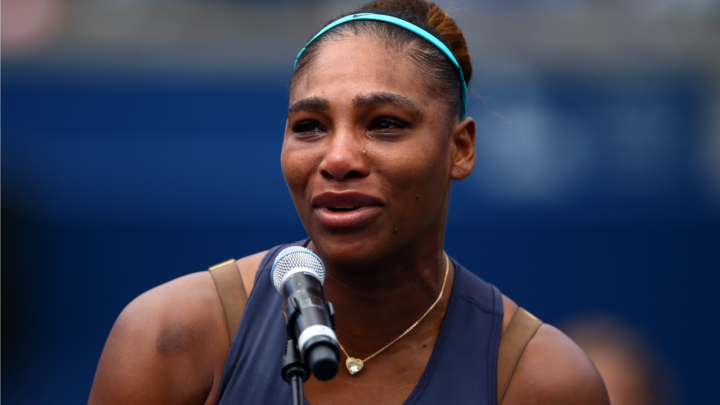 Serena Williams was forced to retire due to a back injury. Source: Getty

Serena Williams has broken down in tears after being forced to pull out of the final of Canadian WTA tournament the Rogers Cup on Sunday. The 23-time grand slam winner announced she was retiring due to a back injury, while competing against Canadian teenager Bianca Andreescu in the final.

Speaking after the tournament, in a video shared on Twitter by the Women’s Tennis Association (WTA), the tennis great told the crowd in between sobs: “Thank you guys. I’m sorry I couldn’t do it today, I tried, but I just couldn’t do it. Thanks to Jehovah for letting me come out here and Bianca you’re a great sports person, woman, and thanks for my team it’s been a tough year, but we’ll keep going.”

You're a 🌟, @serenawilliams .#RC19 pic.twitter.com/KeBOiYa48g

Meanwhile, in a press conference later that day, which was shared online, the tennis great spoke of her injury, saying: “It just got worse. My whole back completely spasmed to a point where I couldn’t sleep and I couldn’t really move. I was just trying to figure out how do you play a match where you have no rotation.”

She continued: “I love playing here. I love the crowd. I mean it would’ve been a wonderful match regardless of the outcome and I don’t want to get this far and not at least try. I think I would have really regretted not at least going out there and seeing maybe if a miracle happened.”

"I don't want to get this far and at least try. I think I would have really regretted it."@SerenaWilliams talks her back injury. #RC19 pic.twitter.com/da156onZgX

Many fans have since taken to social media to offer support, with one writing: “Worst sight to see a sports person cry! None the less, Serena [you] have been a great example for all the young girls [and] everyone so to speak out there to how to stay competitive [and] humble all the while!” Another added: “This is so unfortunate but health is first and foremost. Serena is and has always been gracious.” While a third wrote: “Seeing Serena cry is making me cry. OMG. Totally devastated for this Queen!”

Meanwhile, it comes after the tennis great teamed up with British tennis champ Andy Murray in this year’s Wimbledon mixed doubles last month. The talented pair have won a combined 27 singles Grand Slam titles — nine of which have come at Wimbledon — so tennis fans were definitely in for a treat!

Sadly they were eventually knocked out of the doubles competition by Bruno Soares and Nicole Melichar, who soared to victory with a final score of 6-3, 4-6, 6-2. Murray, who recently underwent hip surgery, had been looking for a partner after he was turned down by world number one Ashleigh Barty. He also competed in the men’s doubles alongside Frenchman Pierre-Hugues Herbert.

Murray’s agent Matt Gentry confirmed the news at the time, revealing that the two former No. 1-ranked players would partner up at the All England Club. And, soon after, the official Wimbledon Twitter page added more fuel to the fire. The official account shared a short video of the hugely popular duo with their championship trophies alongside the caption: “Coming soon to a Championships near you…”

Many fans were quick to comment on the stellar partnership, with one writing: “So exciting!!! Mixed doubles team of my dreams!!!” Another added: “Very excited to see these two pair up on centre court very soon. One hell of a formidable combination.” Meanwhile a third wrote: “I really really hope this happens. My hubby won tickets in the ballot and I can’t actually believe I am finally saying this but IM GOING TO WIMBLEDON!!”

Are you a fan of Serena Williams? Do you have a message for her?