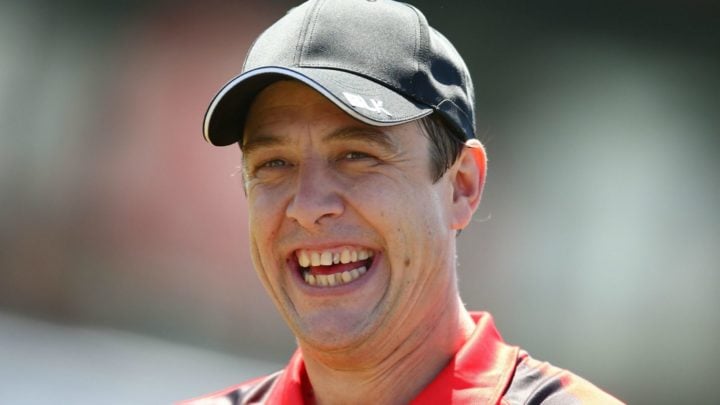 The Aussie actor and cancer activist may be making a return to the silver screen. Source: Getty.

Samuel Johnson has spent the last few years sacrificing his own career in TV to fight for his late sister Connie’s cause — raising both awareness and money for cancer research. But the Aussie actor and cancer activist has now revealed that a return to the small screen may not be that far off.

Speaking in an exclusive chat with Starts at 60, the 42-year-old revealed he’s considering a return to acting. Back in 2016, the Gold Logie winner vowed to put his career on hold until his charity ‘Love Your Sister’, which he co-founded with his late sister in 2012, raised $10 million. And now, with $13 million under his belt, a move back to acting for Samuel could soon be back on the cards.

“What I said was that I would retire until we raise $10 million, because I felt like I couldn’t do both and we’re now sitting on $13 million, and I’m considering offers,” he said.

Asked if he missed acting at all, Samuel replied with: “If I never did it again I’d be okay with that, but you know I still keep an eye out just in case the job of a lifetime turns up.”

Connie sadly passed away from terminal breast cancer in September 2017, at the age of just 40. Over the past few years, Samuel has gone out of his way to raise money and awareness for cancer. It’s meant he’s turned down a series of TV opportunities in recent years to honour his promise of reaching the fundraising goal — including a dream gig with Hollywood star Cate Blanchett.

Samuel’s big break came in 2001 at just 23 years old with a starring role in hit drama The Secret Life of Us. He’s also starred in popular series like Rush, Underbelly and After the Deluge, but many Aussies will have particularly fond memories of Samuel as legendary star Molly Meldrum in 2016 miniseries Molly. Meanwhile, he recently enjoyed a brief stint on reality series Dancing With The Stars, which he went on to win.

It might have taken him seven years, but Samuel finally achieved his goal of reaching $10 million in August last year. Samuel took to social media at the time to share the incredible news with a touching message to Connie, explaining he’s the “proudest brother in the world”.

The media personality wrote: “First I promised my sister then I promised all of us. It took seven years. We came good. Thank you. $10M for cancer research banked. I’m the proudest brother in the world right now.”

Samuel continued by explaining how grateful he is for the support received so far in the development of his Love Your Sister charity, which was created with Connie after she dared her younger brother to unicycle around Australia in the face of her terminal diagnosis. “Thanks for showing me how to be,” he added on the post. “You gave me somewhere to belong. F**k I love this village. Today I stand tall.”

Are you a fan of Samuel Johnson?