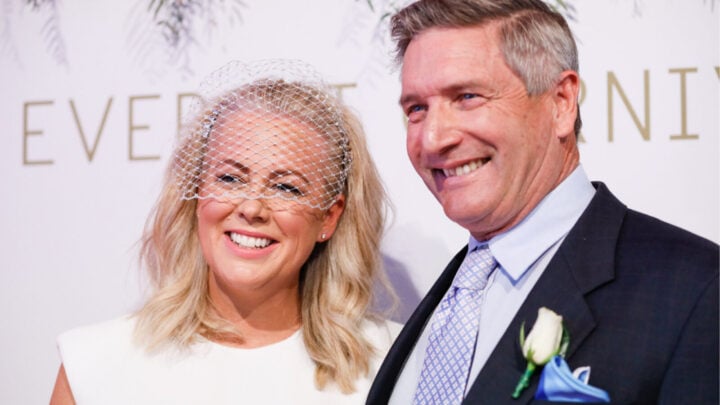 Samantha Armytage revealed she was engaged to horse breeder Richard Lavender in June this year, and now the couple have made their red carpet debut as they posed for photographs together at Royal Randwick Racecourse on Saturday.

The soon-to-be-wed couple beamed as they stood alongside each other at the TAB Epsom Day yesterday. The Sunrise star looked sensational in a white Carla Zampatti dress and vintage-style veil headpiece, while Richard, 60, looked dapper in a dark navy suit.

Samantha completed her look by pairing her fitted white frock with a simple pair of open-toed white sandals and opted for simple jewellery, which included her gorgeous engagement ring.

Richard also opened up about his love for the 44-year-old journo to The Daily Telegraph, telling the publication that it was love t first sight for him when he met the television journalist through mutual friends.

“It was immediate,” he told the Daily Telegraph. “This sounds really stupid but I thought, ‘gee whiz, I like that girl’ from the moment I first saw her.

“I had no idea what she did or anything like that, which was probably a plus. You know when you meet someone and you feel comfortable.”

Sam opted to share the happy news of her engagement on social media earlier this year, when she uploaded two photos of herself showing off a dazzling diamond ring. Sam’s delight was clear to see as she smiled widely at the camera with her hand placed on Richard’s chest.

She later revealed on Channel Seven’s Sunrise that Richard had popped the question in a “private and lovely” way on his property in the New South Wales Southern Highlands.

“We’d been picking weeds in the paddock and he said ‘darling, do you want to marry me?” the bride-to-be said. “It was very sweet, and he’s a very good man.” She added: “He’s just a very, charming, lovely fellow. He is totally the opposite of the showbiz world and TV.”

Do you believe in love at first sight?