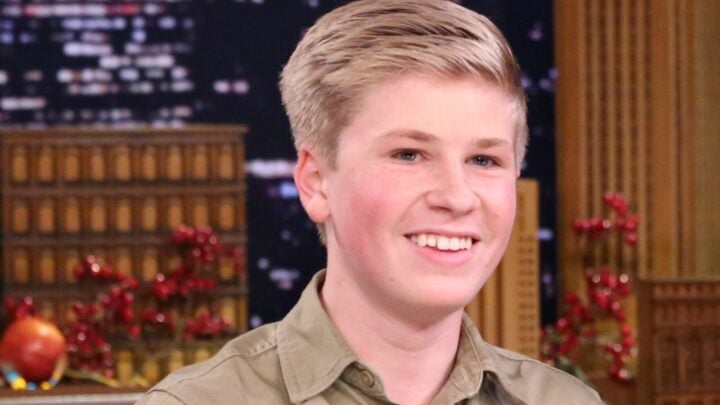 Robert Irwin shared an adorable photograph of himself cuddling up to a crocodile. Source: Getty.

The saying goes ‘like father, like son’ and that’s certainly the case for Robert Irwin and his late father Steve Irwin. On Saturday, Robert, 16, shared an adorable photograph of himself cuddling up to a crocodile at the family’s Beerwah zoo — and fans couldn’t get over how similar Robert looked to Steve in the snap.

The young conservationist, along with 22-year-old sister Bindi, has followed in his father’s footsteps in many ways and is already an established wildlife photographer in his own right, as well as being a regular at media events such as The Logies and on TV chat shows. And he may be just 16, but Robert has been taking part in the world-famous crocodile shows at Australia Zoo on the Sunshine Coast for years too. So it’s no surprise that fans of the late wildlife warrior may mistake the youngster for his father.

The snap showed Robert – wearing the iconic khaki zoo uniform that is synonymous with his dad – holding a crocodile with both hands while smiling widely at the camera. The funny thing is, Steve posed for an almost identical photo about 18 years ago.

Fans couldn’t believe the resemblance between Robert and his late father, with one writing: “Like father, Like son. How adorable can you get, Rob!” Another added: “Just like your dad.” While a third wrote: “Looks just like his dad.”

It comes just a day after Bindi wished her later father a happy early Father’s Day by sharing a beautiful never-before-seen throwback of the pair. The post showed the late Aussie icon, dressed in his signature khaki green outfit, playing with a much younger looking Bindi at the beach.

“You’re always in my heart,” Bindi, 22, who recently announced her pregnancy with husband Chandler Powell, captioned the sweet post at the time. Steve – commonly known as The Crocodile Hunter – was killed in 2006 in the now-infamous incident at Batt Reef, near Port Douglas, Queensland, when he was pierced through the heart by a stingray barb while filming for TV series Ocean’s Deadliest.

Many fans were quick to comment on the heartwarming post, with one writing: “He’s always watching over you guys.” Another added: “So sad he went too soon, R.I.P Steve.” While a third wrote: “Oh, that’s beautiful.”

Do you think the pair look similar?