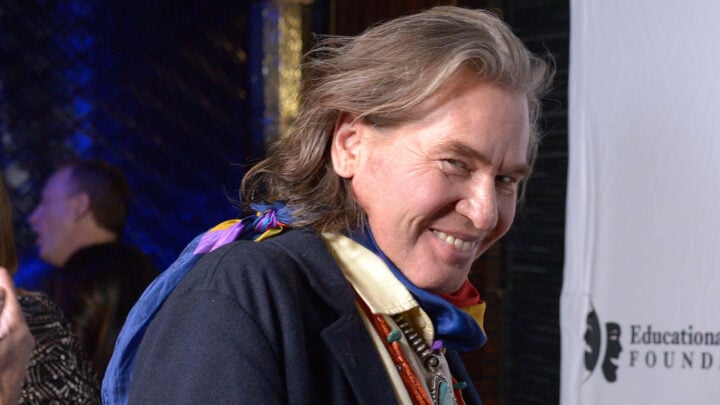 Val Kilmer's new documentary will give us an intimate look into the actors life. Source: Getty

Val Kilmer has starred in some of Hollywood’s biggest blockbuster movies including ‘Top Gun’, ‘The Island of Dr. Moreau’, ‘The Doors’, ‘Tombstone’, and ‘Batman Forever’, but what many don’t know is while appearing in other people’s films for nearly 40 years, he’s been filming himself for even longer.

Kilmer, 61, has graced our screens as an array of iconic and unforgettable characters, but a new documentary set to air later this month will give us a look into his life through his eyes, collating thousands of hours of footage shot by the actor throughout his life.

“My name is Val Kilmer, I’m an actor, and I’ve lived a magical life,” he says in a recently released trailer. “I’ve recently been diagnosed with throat cancer. I’m still recovering and it is difficult to talk and be understood, but I want to tell my story more than ever.

“I have behaved poorly, I have behaved bravely, bizarrely to some… I see myself as a sensitive, intelligent human being, but with the soul of a clown.”

While you’ll surely remember him for his iconic performances, many may also recall his notoriously explosive off-screen behaviour. Following ‘Batman Forever’, director Joel Schumacher famously labelled the actor “psychotic” and called him the most disturbed person he had ever met.

The actor was also rumoured to have anger issues, with ‘The Island Of Dr. Moreau’ director John Frankenheimer saying: “I will never climb Mount Everest and I will never work with Val Kilmer again.”

Kilmer started filming as a kid on his father’s California ranch, making remakes and parodies of his favourite movies with his late brother Wesley. He continued to document his life through film and amassed thousands of hours of footage of some of his biggest milestone moments, now the footage has been collated into a raw portrayal of the actor’s personal and professional journey.

Being hailed as intimate, raw and unmissable, the documentary is shot over four decades and reveals his experiences playing some of his biggest roles including Doc Holliday, Batman, Jim Morrison, and Iceman, but also a behind-the-scenes look at Kilmer’s life between films, capturing intimate moments through his bitter divorce from Joanne Whalley and his ongoing cancer battle.

In 1995, while Kilmer was filming ‘The Island Of Dr. Moreau’, he was served with divorce papers from Whalley, who took him to court twice and accused him of an affair with a waitress and of failing to provide a home for their children. During the divorce, Kilmer was rumoured to be romancing model Cindy Crawford.

Kilmer was diagnosed with throat cancer in 2017, and the film documents the experience and subsequent treatments that rendered him almost unable to speak. Initially keeping his illness private, the troubled star disappeared from Hollywood until now.

Variety has labelled the documentary a “heartfelt portrait, which captures Kilmer’s talent, intelligence, and gift for self-sabotage”, describing the iconic actor as a “broken-down relic of himself”.

The documentary is set to be released on July 23.

What role do you remember the actor for best?