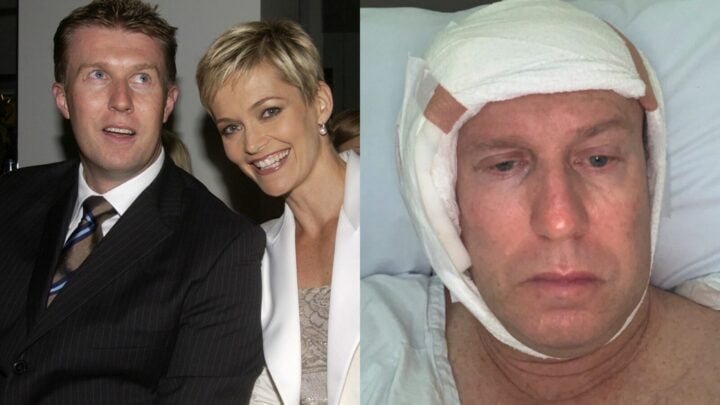 Overton told the radio host he’s “okay” but “a little battered and bruised”, saying: “It looks like someone’s punched me, it looks like I’ve been glassed and stitched back together.”

Speaking about the procedure, he said: “They have to cut a huge section and that’s been the most confronting thing. When Jessica cut off all the bandages yesterday when I was allowed to remove all that headwear, it was quite a shock to see the extent of the stitching and the flaps of skin they had to put over.”

However, the newsreader said he hopes to be on the mend soon. It comes just one day after Overton took to Twitter to urge others to get checked after uploading a fairly confronting post-surgery photo of himself. In the image, the father-of-two can be seen wearing a dressing around his head.

“I have fair skin & am vigilant re my skin checks every few months,” he captioned the post. “My wonderful dermatologist spotted something unusual on my right temple — melanoma. Surgery yesterday to remove it. I am a lucky fella. For those thinking about getting their skin checked. Do it. Now.”

Many Twitter users were quick to comment on the post at the time and wish Peter a speedy recovery with The Morning Show host Larry Emdur commenting: “Sending you lots of Covid-safe man hugs @PeterOverton. Quick recovery mate.