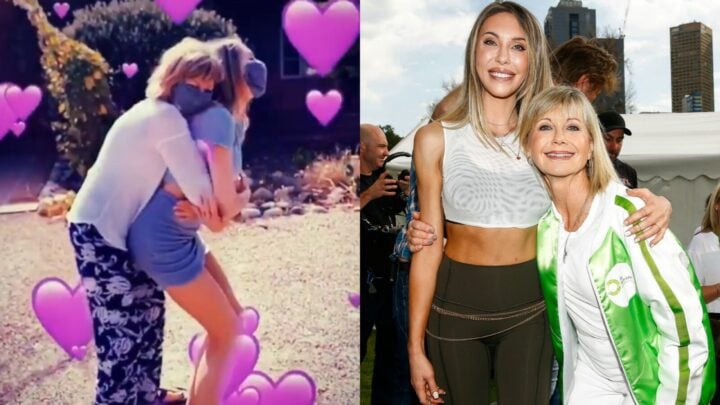 Olivia Newton-John, 71, has reunited with her 34-year-old daughter Chloe Lattanzi after spending months apart as a result of Covid-19 restrictions. On Tuesday, Chloe took to social media to share an emotional video of the mother-daughter duo reuniting.

Due to the ongoing pandemic, the Oregon local has reportedly been forced to stay away from her mother, who lives in California and is currently fighting stage four breast cancer. In the video, the pair can be seen embracing each other.

“Finally reunited and it feels so good,” Chloe captioned the video.

Many fans were quick to comment on the heartwarming video, with one writing: “How cute! Thank you for sharing! Who doesn’t like videos like these?! A mom’s [sic] love is forever! Enjoy the summertime, you two.”

Another added: “So sweet and very touching to see you both be reunited.” While a third wrote: “So happy for you two! The love between you two shines so brightly.”

It comes a few months after Chloe spoke to 9Honey Celebrity about missing her mum. “I cannot wait until I can hold her in my arms and squeeze her,” she told the publication back in May.

“This is a very hard time right now and I hope everyone gets to spend time with the ones they love and appreciate this Mother’s Day.”

Meanwhile, earlier this year, Olivia gave an update on her health as she battles cancer for the third time, telling the Herald Sun that she credits the use of medicinal cannabis and natural therapies for the fact that her tumours have shrunk.

“When people hear metastatic breast cancer or cancer there’s still this stigma that people don’t believe that you can recover, well you can,” the Grease star said at the time. “There are ways. I know lots of people who have been given really terrible diagnoses who have done really well with the right treatment and they’re not always chemo and radiation either.”

Olivia was initially diagnosed with breast cancer in 1992, resulting in a partial mastectomy and chemotherapy. She then went into remission until 2013 when the cancer returned, with the actress undergoing another round of treatment. However, the star was diagnosed once again in 2017 after a tumour was located in her lower spine.

Did you not see family during the pandemic?