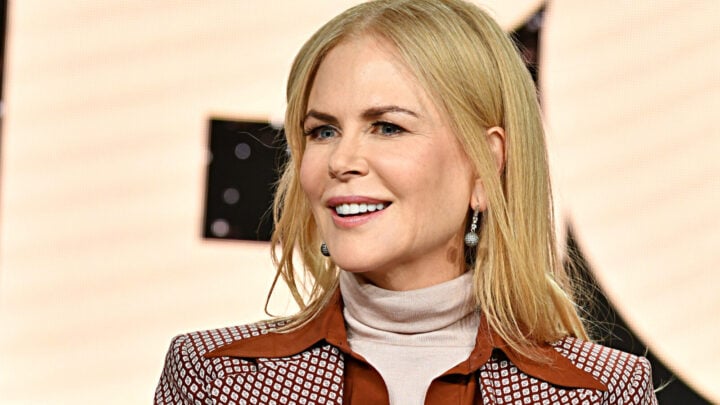 For as long as we can remember Nicole Kidman has had long, red or strawberry blonde curly locks but that all changed this week after the Australian actress shared a photo of herself debuting a brand new hairstyle — and it’s left some fans shocked.

The mother-of-two, 54, looked unrecognisable as she posed on the set of her latest television series Roar. Nicole ditched her usual red mane for a very short pixie cut in a strawberry blonde shade.

“On set #Roar #FemaleFilmmakers,” she captioned the snap.

Fans of Nicole’s were quick to comment on her dramatic new hairstyle, with one commenting: “This is so majestic and just fabulous!!! Go off my Queen.”

Another added: “I love your new hairstyle.”

While a third commented: “You let them cut your fabulous hair??? I hope that’s a wig But you’re still beautiful.”

Fans can be rest assured, however, that the new look is most likely temporary, as the actress usually sports an array of wigs for her many roles – for example, Celeste’s thick fringe in Big Little Lies and Mrs. Barbour’s greyish, layered bob in Goldfinch.

More recently, the actress was snapped in a shoulder-length, red wig as she played Lucille Ball in the upcoming movie, Being the Ricardos, which also stars Spanish actor Javier Bardem as her husband Desi Arnaz.

In April, the pair were pictured filming a scene in Los Angeles for the new movie — and the two certainly bared a striking resemblance to the late icons! In the photos, which were shared widely on social media, Nicole, could be seen wearing a retro 1950s ensemble that included yellow slacks, a checkered coat and a headscarf. The Big Little Lies star was pictured leaning on a vintage green car. Meanwhile, Javier, 52, looked a little more dressed up in a tuxedo with a green jacket.

While Nicole no doubt loves getting into character, she recently told The Sydney Morning Herald that she’s starting to embrace her natural hair again after spending years straightening the curls out.

“Do I wish that I hadn’t screwed up my hair by straightening it all the time?” she said at the time. “Sure.”