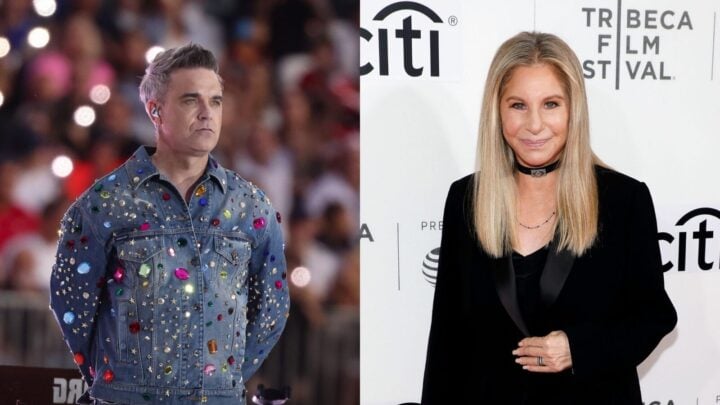 Singing sensation Robbie Williams has revealed the “nice old lady” he met on his holiday, was legendary singer and actress Barbara Streisand.

Speaking on BBC Radio 5, the Swing When You’re Winning singer revealed the slight went both ways, saying the 80-year-old Funny Girl actress didn’t recognise him either.

“Nice old lady. Then I sat down next to Barbra. And it was Barbra Streisand. And I was like, ‘Oh, ahh’.”

Williams said that group chatter of his yearly charity football game, Soccer Aid, must have given Streisand the impression that the singer was a footballer, and it seems that even after correcting her, Streisand still didn’t recognise the Let Me Entertain You star.

Streisand could be forgiven for not recognising Williams, as the singer has been seeing double lately with the five-time Oscar winner’s cloned pets.

Although the eight-time Grammy award winner actually has three Coton de Tulear dogs, Scarlet and Violet are clones of Streisand’s beloved original, Samantha, while Fanny was bought from Samantha’s breeder.

Streisand has a tombstone for Samantha, often taking her cloned pets she lovingly calls “the twins” to visit their “mom”.

“The twins Scarlet and Violet honouring their mom (with cousin Fanny in the center!),” she captioned an image of the three pooches visiting Samantha’s grave.

The three white balls of fluff are Streisand’s pride and joy, often sharing their adorable escapades on her social media.

According to People magazine, Streisand revealed she’d had cells taken from her treasured Samantha’s mouth and stomach before she died, to be used for the cloning process.

The iconic singer and actress said losing Samantha “was like losing a child, it was kind of awful”.

“It was easier to let Sammie go if I knew I could keep some part of her alive, something that came from her DNA,” Streisand said.

“One of the reasons I chose cloning was because I couldn’t find another curly-haired Coton.

“It’s a bit overwhelming. But we love them so much. Each puppy is unique and has her own personality.

“You can clone the look of a dog, but you can’t clone the soul. Still, every time I look at their faces, I think of my Samantha… and smile.”